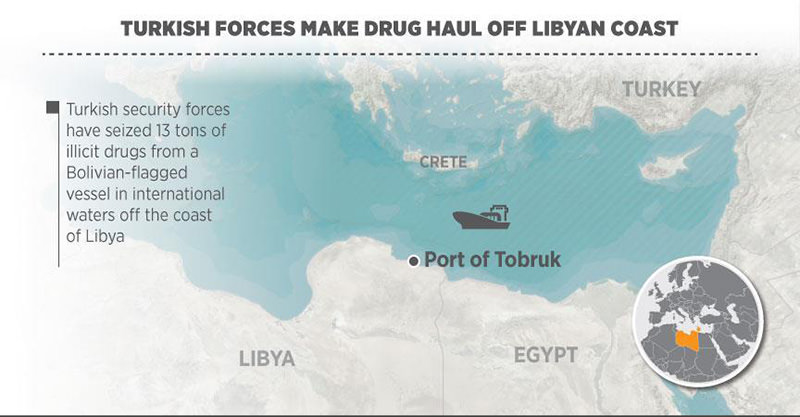 | AA photo
by Daily Sabah Jan 07, 2016 12:00 am
An unprecedented operation in international waters on Tuesday highlighted Turkey's presence in the international fight against drugs, and hints at the possibility of the Syrian regime's involvement in the drug trade.

Turkish authorities revealed on Wednesday that a raid on a Bolivian-flagged vessel, which departed Syria in international waters off the coast of Tobruk, Libya, had taken place. At least 13 tons of marijuana in powdered form was discovered aboard the vessel. The ship was towed to Turkey yesterday, and 10 foreigners, reportedly an all-Syrian crew, were brought to the country.

"Operation Albatross" as named by authorities, was a first-of-its-kind in decades, and concluded with the largest drug haul captured by Turkey in international waters. The operation comes at a time of a heightened fight against drugs by Turkey, which increased operations against drug smugglers, and a time of tensions in the Mediterranean, which became a hotspot in the face of the conflict in Syria – a littoral country to the vast sea like Turkey. Syria's Mediterranean ports are largely controlled by the regime of Syrian President Bashar Assad, and maintain busy traffic from Russian naval ships after the Kremlin began airstrikes in Syria a few months ago purportedly to stop DAESH.

It was reported that the drugs found aboard were destined for European countries, while several experts suggested that it was unlikely the Syrian regime was unaware of the drug shipment from a port tightly protected by regime forces.

Turkey lies on a transit route for drugs between Asia and Europe where synthetic drugs and drugs made of opium are smuggled to Middle Eastern and European countries interchangeably. In a joint operation by the Coast Guard, which dispatched ships to intercept the M/V Joudi, the Turkish National Police's Special Operations Unit and Counter-Narcotics Unit, security forces flanked by aircraft and a helicopter approached the vessel, which had left Syria's Tartus port earlier, some 55 sea miles from Libya's Tobruk port. For hours, Turkish security personnel attempted to stop the vessel, which evaded Turkish forces and resisted attempts to be taken over. Finally, security forces managed to stop the crew and take control of the ship by firing water cannons on the vessel. A thorough search found 13 tons of drugs and a broken engine sabotaged by the crew.

The operation was launched based on intelligence acquired by security forces on drug traffic between Syria and Europe, and the Coast Guard was in pursuit of the ship as soon as it entered the territorial waters of the Mediterranean island of Cyprus.

Turkey last launched operations against two ships transporting drugs more than two decades ago in international waters in the Mediterranean Sea, and has seized more than 15 tons of drugs in two operations against ships owned by Turkish drug smugglers. But it is the first time that the Coast Guard, whose work is mostly focused on the security of Turkish waters and the interception of illegal crossings, conducted such a large-scale operation.