A taste of democracy for Syrian children at Turkish refugee camp 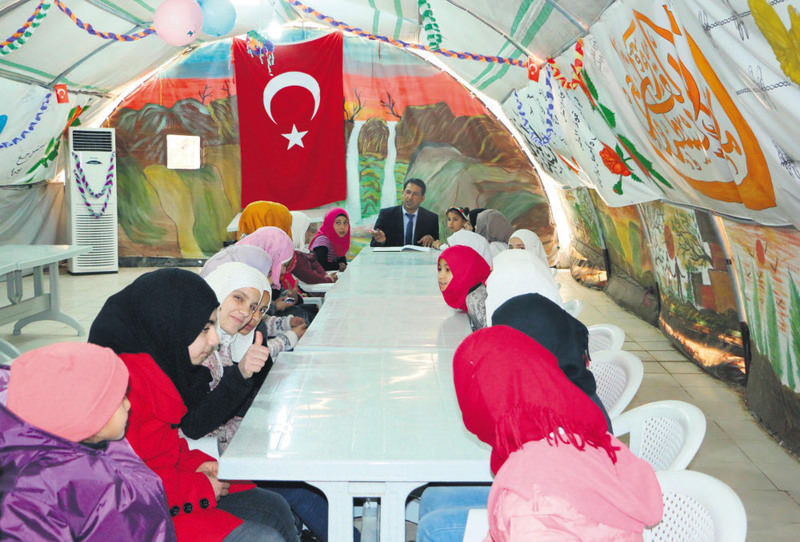 Syrian children with a camp official at a session of their assembly at the Aku00e7akale refugee camp. (AA Photo)
by Daily Sabah with AA Jan 09, 2016 12:00 am

Fleeing from a regime violently suppressing any form of protest, Syrian children who took shelter at a refugee camp in Turkey have their own ‘assembly' where they can voice their demands to the camp's administration and socialize

A few kilometers away from their home country, Syrian children in the border town of Akçakale are closer to democracy, which remains largely nonexistent in war-torn Syria. The "Children's Assembly" set up at the refugee camp, which houses some 11,000 children among 30,000 others, is not exactly a democratic institution, as the camp administration still has the final say over matters. But still, it offers children an open platform to voice their demands - unlike Syria where even a minor rally against the regime can land you in jail or worse. Moreover, it gives them new means to socialize in the crowded camp in the province of Şanlıurfa.

About 100 children are members of the assembly, whose agenda includes what social and recreational activities they can organize. Mahmut Yalçınkaya, a Turkish camp official, coordinates the work of the assembly. "This is something we do to boost the morale of the children, helping them resolve their problems and make new friends here," he told Anadolu Agency (AA).

Children make up a substantial part of the more than 2.4 million Syrians who have taken shelter in Turkey, although only a small number of them live in the 25 refugee camps run by the state-run Disaster and Emergency Management Authority (AFAD) in several cities along the Syrian border. They are among the most vulnerable of millions of displaced Syrians living in Turkey, Lebanon and Jordan, as they suffered trauma inflicted by a conflict at a young age and have little means to spend a normal childhood in the face of poverty and the sense of an uncertain future.

The assembly convenes at least once a week and children relay their needs to camp officials, mainly calling for activities they ask the administration to organize. Children in the assembly are elected from among volunteers.

The Akçakale camp also houses a youth and women's assembly where two groups discuss ways to improve the camp's conditions. The assembly also gives an opportunity to the camp administration to educate the children. For instance, members of the assembly recently organized a cleaning campaign at the camp to raise awareness for cleanliness.

Young members of the assembly, mostly girls, thank Turkish officials, and said the assembly and activities it helped organize keep their spirits high. The assembly's latest session was on Thursday, and after discussing what to do next to break the tediousness of living in a refugee camp, children came together to sing songs in Arabic as well as in Turkish that they learned at the camp.

The camp in Akçakale, one of the first camps built by Turkey after the 2011 uprising in Syria erupted into an all-out conflict and displaced millions, offers a range of facilities to refugees from schools to clinics, like many other camps in Turkey. However, the assembly is a one-of-a-kind among the camps, which are praised for the services they provide to refugees. Children are confined to the camps in the face of the ongoing conflict in their country, and they spend time either at schools or in the playgrounds. Some camps also offer film screenings for children.
RELATED TOPICS