Migrants continue to defy death on the Aegean 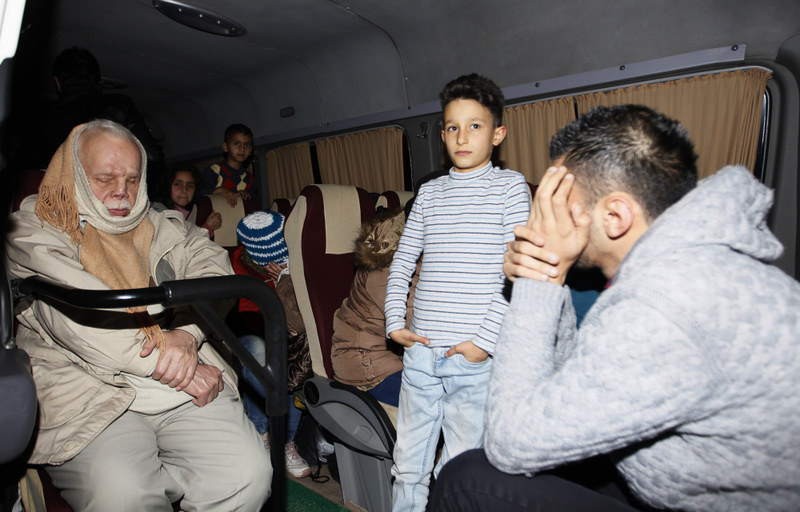 by daily sabah Jan 15, 2016 12:00 am
More migrants were intercepted on Thursday as Turkey struggles to cope with an influx of refugees seeking to cross into Europe.

In the western city of İzmir, 54 Syrian refugees heading to a beach to board a boat for Greece were stopped by police. The migrants were traveling in two minibuses when they were intercepted at a police checkpoint in the city's Güzelbahçe district. Police detained the Turkish minibus drivers, while the refugees said they were headed to Seferihisar, a seaside town, for a journey to the nearby Greek islands, the closest gateway by sea to Europe for refugees from all around the world. Along with the migrants, many of them children and women, police found a large number of life vests, the only means of safety for the migrants during the potentially fatal journeys in the rough sea. A closer inspection revealed the vests were fake. İzmir recently became a hub for a flourishing black market industry of fake life vests, as the number of migrants arriving in the city dramatically increased last year. Syrians prefer those vests as they are cheap, unaware that the vests are filled with materials, which are better at absorbing water, rather than keeping them afloat.

Authorities yesterday also intercepted 246 refugees in the western city of Çanakkale. The group, which consisted predominantly of Syrians, along with one Iraqi and 39 Afghan nationals, were traveling to a beach to depart for the nearby Greek island of Lesbos when police stopped their minibuses. The police also detained 16 people accused of smuggling the migrants.

The flow of refugees has slowed in recent days following the death of more than 30 people, whose bodies washed ashore in Balıkesir, a city near Çanakkale, last week. Although strong winds hamper the journey of migrants, dozens of people still attempt to cross over to the Greek islands every day. According to figures by the International Organization for Migration, 805 people died en route to Greece from Turkey in 2015. The majority of these are believed to be Syrians, fleeing from the ongoing conflict in their country, which shows no sign of ending.

Atilla Toros, head of Turkey's Interior Ministry's Migration Administration department, told a parliamentary committee on Wednesday that the Mediterranean Sea and Aegean Sea had turned into "a cemetery for refugees," with 3,771 deaths in both seas last year. Toros said Turkey had faced an unprecedented flow of migrants, taking in more people in the past five years - since the beginning of the conflict in Syria - than the 1.6 million people who migrated to Turkey between the first year of the Republic of Turkey in 1923 until the 1990s. Toros said more than 146,000 illegal immigrants were intercepted last year, while this number was usually around 50,000 per year in the past. The Turkish Coast Guard patrolling the Aegean Sea intercepted 91,611 illegal immigrants, while other units of law enforcement intercepted some 3,600 migrants, pointing to the sea route being preferred by migrants.

Turkey currently hosts more than 2.5 million Syrians, according to the Migration Administration, and only a small fraction of them reside in refugee camps set up by the Turkish state near the Syrian border. The majority of the displaced Syrians who took shelter in Turkey live in houses they rented or purchased in Turkey, or are forced to live on the streets, makeshift huts and abandoned buildings in the face of poverty. Migrants, however, are an eclectic mix. Along with the poor Syrians attracted to social benefits in Europe for asylum seekers, relatively well-off Syrians have invested all they had, paying smugglers to take them to Europe, as an uncertain future awaits them in Turkey and the region in general.
RELATED TOPICS