Cemetery with no names for refugees with broken dreams 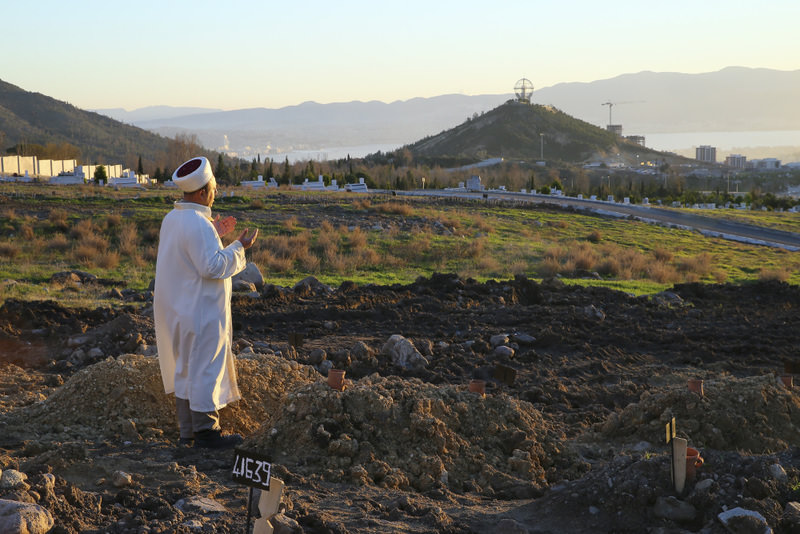 by Daily Sabah with AA Jan 16, 2016 12:00 am
A few hundred meters from graves with white marble headstones engraved with names and birth dates of the deceased lies more than 30 freshly dug mounds. They will not be encircled with expensive marble fences and headstones like in a traditional Turkish cemetery, nor will their occupants be remembered. This is a cemetery for refugees who lost their lives on route to the Greek islands opposite the western Turkish coast when their boats sank. Numbers crudely scrawled on tin plates serve as their only identification. Officials do not know their names or anything else about them save for their sex and possible age discovered during autopsies.

Ali Yaşar is the lone visitor of the graves in the cemetery in İzmir, the western city that was a departure point for thousands of people last year heading to the Greek islands lying a few nautical miles away. His is a mandatory visit rather than an emotional one, as Yaşar is an imam who works at the cemetery, performing last rites for deceased Muslims. He raises his hands by the graveside and solemnly recites prayers for the refugees who drowned in the unforgiving waters of the Aegean Sea. Next to the vast cemetery is a giant monument in the shape of a globe. The World Peace Monument, dedicated to victims of a massacre in Turkey two decades ago, now towers over the cemetery where those seeking peace from war-torn Syria as well as peace of mind and better lives in Europe are buried.

Although many refugees travel with passports with the hopes of seeking asylum in Europe, it is largely impossible for Turkish crews to find such documents when recovering bodies from the sea as they are lost in the process. These victims are buried in the cemetery, which is for people without any immediate relatives.

Yaşar said most of the deceased in the cemetery are Syrians. Thirty-two people were buried after their bodies were found at sea or washed ashore as recently as last week. Nine bodies were brought in on Wednesday and Yaşar oversaw their proper burial. "We perform all religious duties for Muslims just like we do for any other person [that is not a refugee]. We never skip any religious duty just because there is no one to attend their funeral," Yaşar told Anadolu Agency (AA) as a few municipality workers tasked with digging the graves accompanied him. Although he hides his emotions, the veteran imam said it hurts him to see people buried with no one to mourn them.

As he wrapped up his recitation of the Quran, Yaşar recounted how a family found their loved ones in one of the graves, showing a single grave with a tin plate inscribed with the name of the deceased in Arabic. Yaşar hopes people will find their loved ones here and take the bodies home one day.

Time will tell whether more plots will be added to the İzmir cemetery and whether the bodies will finally be found by their families. But it seems unlikely in the near future as conflicts and poverty around the region make Turkey a favorite location for migrants from the Middle East and Asia to cross into Europe. On Friday, four people, including three children, drowned when their raft sank off the coast of Çanakkale, north of İzmir. They were traveling to the Greek island of Lesbos with nine others who survived and were rescued by the Coast Guard. Three refugee children drowned in a separate incident as another boat carrying migrants from Syria capsized off the Greek island of Agathonisi, located opposite the coast of the Turkish town of Didim. At least 805 people died in the Aegean Sea last year, according to official figures, while hundreds of thousands more managed to reach Greece. This year may not see an end to the flow of refugees as the conflict in Syria, the main source of refugees fleeing to Europe, does not show signs of ending.
RELATED TOPICS