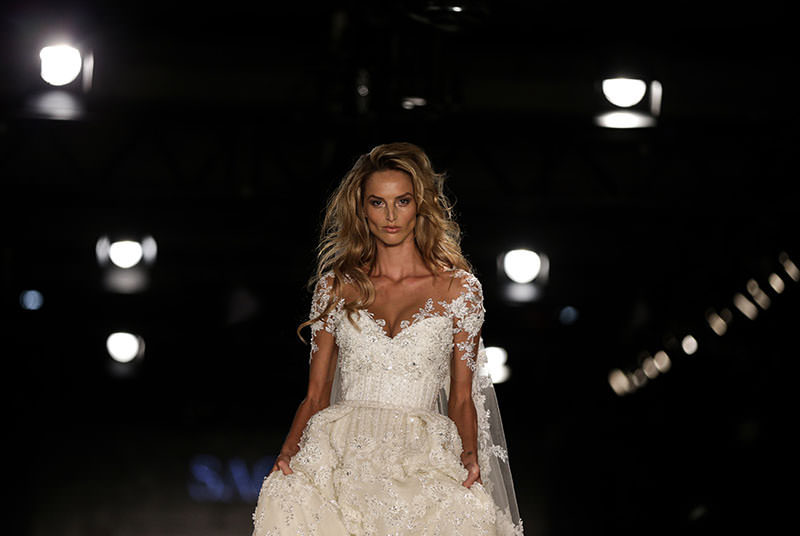 | AA photo
by daily sabah Jan 16, 2016 12:00 am
Victoria's Secret model Michaela Kocianova of Slovakian background said on Thursday during a fashion show in Istanbul that she was not scared to be in Turkey in the aftermath of Tuesday's suicide bombing, according to a news report published by the Doğan news agency.

"I'm in Istanbul and not scared," the famous model said.

Kocianova, born in 1988, was in Istanbul on January 14th due to a deep water themed fashion show of Sagaza Madrid brand, held in the city's Lütfi Kırdar Congress Centre. Kocianova was on stage as prime model showcasing pieces of 2016 spring/summer collection.

In response to a question with regards to Tuesday's Istanbul suicide bombing, Kocianova said: "If it is your turn, you die. It does not matter whether you are in Istanbul, London, or New York. Because this is the only you can stand up against them [terrorists]."

An explosion occurred in Istanbul's Sultanahmet Square early on Tuesday, killing 10 inuring 15. The officials said that blast was done by a male Syrian suicide bomber believed to be a member of the Daesh terror organization.

Turkey is one of the world's most popular tourist destinations, visited by more than 35 million people a year, and the industry is one of the most important sectors of the Turkish economy.

Interior Minister Efkan Ala said last week that tourists should not give into fear and carry on as normal. "We have taken necessary security measures," he said in a Wednesday news conference. "There is no reason to be worried."

German Interior Minister Thomas De Maiziere said after the attacks that there was no reason for German nationals not to travel to Turkey.
Last Update: Jan 17, 2016 12:23 pm
RELATED TOPICS