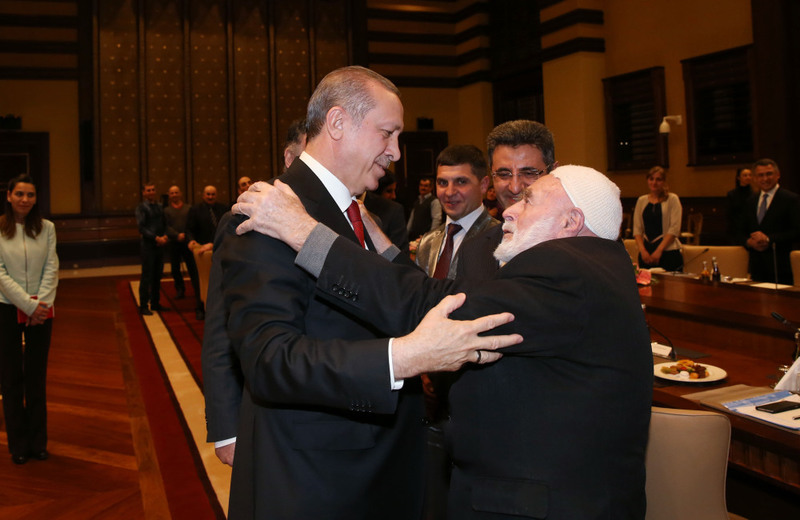 by Hasan Ay Jan 16, 2016 12:00 am
Ilimdar Nuriyev, 89, (pictured above with President Recep Tayyip Erdoğan) was a teenager when the Soviet government under Joseph Stalin ordered the relocation of Meskhetian Turks in Georgia to Central Asia, namely Uzbekistan, in 1944. Now, after decades of exile, he joined fellow Meskhetian Turks traveling to Turkey, calling it their second home.

In December, Turkey received the first group of 677 families of Meskhetian Turks from Ukraine. They were flown to Turkey and were accommodated in new residences built for them on orders from the presidency. At every occasion they expressed their gratitude to Turkey and especially President Recep Tayyip Erdoğan. He listened to their requests during a visit to Ukraine last year and facilitated their relocation to Turkey from the Eastern European country where a conflict between pro-Kiev and pro-Russia forces still simmers.

Nuriyev and others from 150 families who settled in the eastern province of Erzincan met Erdoğan earlier this week. The elderly man was emotional during his meeting with Erdoğan, and said he prayed for the president and Turkey's prosperity. "Turkey has always been our only hope. Erdoğan brought us to Turkey. May God bless him," he said. Turkey will receive another group of Meskhetian Turks from Ukraine in April who will be accommodated in Ahlat, another eastern town.

In their fourth home after they were driven out of Uzbekistan in 1989 during a pogrom, Meskhetian Turks now live as resident migrants, a special status allowing for permanent residence. Deputy Prime Minister Yalçın Akdoğan oversees the resettlement of Meskhetian Turks, and said the majority of them will be settled in Erzincan, while 72 families will reside in Ahlat. "We embraced Meskhetian Turks and [Erdoğan] is very interested in their situation. [Prime Minister Ahmet Davutoğlu] ordered all assistance to be provided for them. These people suffered much after the conflict erupted in Ukraine. We had a moral and humanitarian duty to help them. They are our brothers and sisters," Akdoğan said.

"They are now hopeful for their future. They are a part of this nation and state. We will always help them," Akdoğan said, stressing that they will be issued work permits soon.

Meskhetian Turks were expelled in 1944 from their homeland, an enclave known as Meskheti in Georgia upon Stalin's orders in an attempt to remove Muslim communities from the Caucasus or rather, the shores of the Black Sea.
RELATED TOPICS