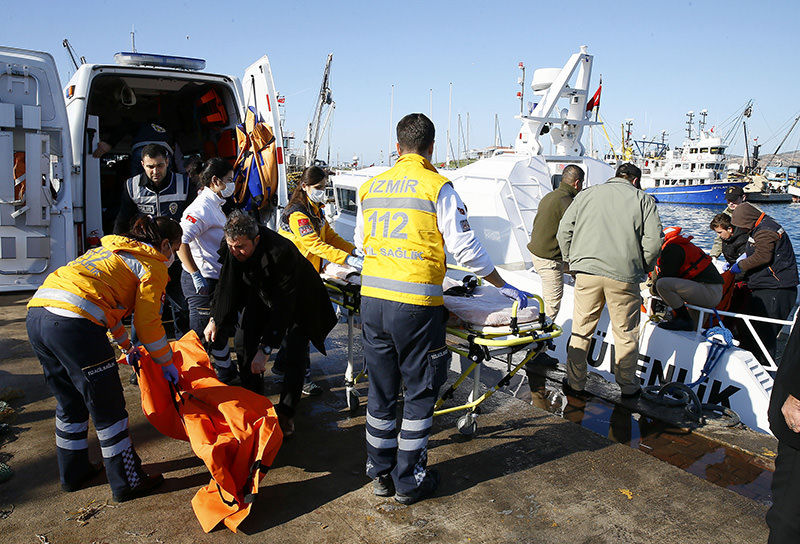 | AA photo
by Compiled from Wire Services Jan 21, 2016 12:00 am
Twelve migrants died when their boat sank off Turkey's Aegean coast on Thursday. The majority of them were Syrians and they were heading to the nearby Greek island of Lesbos from the shores of İzmir, a western city.

Coast Guard officials said a helicopter and three boats were dispatched to the area after a distress call. Four survivors were recovered from the sea by fishing boats while bodies were brought to the coast by Coast Guard officials. Crews are still combing the Aegean Sea for potential survivors as it was not clear how many people were aboard the rubber boat.

Turkish media reported three children were among the victims while a woman suffering from hypothermia and another from a broken arm were hospitalized.

The boat was some 13 sea miles off the Foça coast of İzmir when it sank for an unknown reason around 10:00 a.m. Migrant boats usually sink or capsize either due to bad weather or overcrowding, two factors that were apparently present in Thursday's incident.

Security forces detained two people in connection with the sinking on charges of human trafficking.

The Aegean route to Europe via Turkey is one of the shortest for migrants. Yet, it is also the deadliest as most take the journey aboard unsafe and packed dinghies, braving cold weather and strong winds. Some 806 people died in the eastern Mediterranean Sea where the Aegean region is located in 2015, according to data from the International Organization for Migration (IOM). More than 30 people perished in the first week of January in one of the worst disasters to befall migrants and their deaths en route to Greece were discovered only when their bodies washed ashore in Balıkesir, a northwestern Turkish city on the Aegean coast.

Though the death toll is dire and is expected to rise further, hundreds of thousands of others managed to reach Greece last year. This year may not see an end to the flow of refugees as the conflict in Syria, the main source of refugees fleeing to Europe, shows no signs of ending.
Last Update: Jan 21, 2016 3:45 pm
RELATED TOPICS