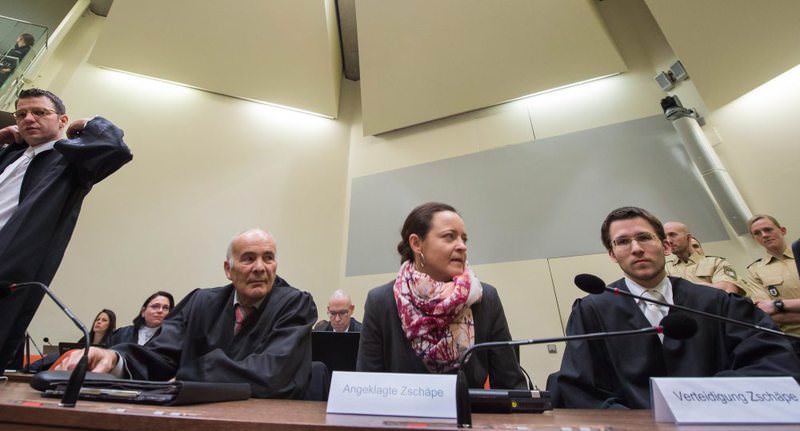 by Anadolu Agency Jan 23, 2016 12:00 am
The prime suspect in the continuing National Socialist Underground (NSU) trial has said she was not involved in the murders committed by the terrorist group and was informed about the murders by her two associates only after the fact 40-year-old Beate Zschaepe's answers to written questions filed by the court were read out loud by her lawyer Hermann Borchert.

Prosecutors accuse Zschaepe of being part of a covert right-wing group that murdered eight Turks, a Greek and a German policewoman between 2000 and 2007, as well as conducting two bombings in immigrant areas of Cologne and 15 bank robberies. She faces life imprisonment if found guilty.

Zschaepe, who had said nothing throughout the trial that began in 2013, broke her silence last December to deny all charges. There are also four suspects tried for aiding and abetting the terrorist group.

She admitted singing songs with racist and right-wing content in her youth but argued that there was a huge difference between singing such songs and murdering people. She also listed all the people who the group associated with, saying that all had either testified or were currently on trial as suspects.

"I have known Boehnhardt since I was 19. He only did what he wanted to," her statement read.

Afterwards, Ralf Wohlleben, a defendant accused of supplying weapons to the NSU, asked the court to declare a mistrial because their state-supplied lawyers did not allow them to speak.

The NSU trial was entangled with criticism for not shedding light on German intelligence's relations with the neo-Nazi scene and the NSU and a dispute between Zschaepe and the lawyers she sought to fire.

The trial will soon enter into its third year and is expected to wrap up in 2016 while a parliamentary inquiry committee continues its work to further investigate the gang, its crimes and connections.
RELATED TOPICS