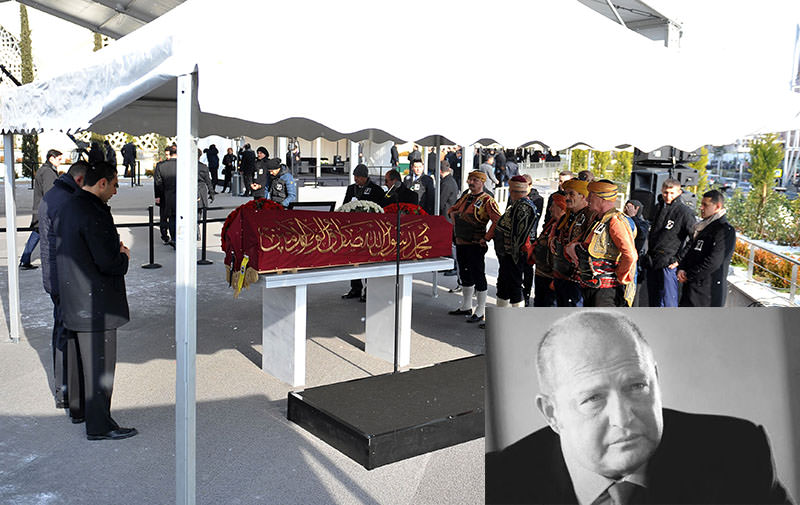 The funeral of Mustafa Koç, the chairman of one of Turkey’s largest business conglomerates, brought together Turkey’s business elite as well as the country’s leaders as the Koç family bid farewell to the tycoon who died of a heart attack last week

Koç died during a morning workout at his Istanbul home at the age of 55. His unexpected death sent shockwaves across the business world that his prominent family dominated. The businessman was chairman of Koç Holding, a sprawling business empire founded by his grandfather Vehbi Koç. He was the third generation of the business dynasty named one of the wealthiest in Turkey.

The businessman was laid to rest in Istanbul's Zincirlikuyu cemetery in a family plot next to his grandfather following funeral prayers in the mosque at Marmara University Theology Faculty where his company used to host iftar (fast-breaking) dinners for Muslims during the sacred Muslim month of Ramadan every year. His coffin was draped with an Ottoman-era banner the Koç family owned, which was brought from the Sadberk Hanım Museum, a private museum established by the Vehbi Koç Foundation in memory of Vehbi Koç's [Mustafa Koç's grandfather] deceased wife Sadberk.


The following sentences were written on the flag:

"There is no other divinity than Allah, the owner of rights and the real universe. [Prophet] Muhammad, the trustworthy and faithful to his words, is Allah's envoy."

Koç's father Rahmi, brothers Ali and Ömer, his wife and daughters received condolences at the funeral, which followed a ceremony at the company's headquarters. Despite the cold and snowy weather, a long line of mourners flocked to the "condolence tent" where the Koç family was present. Employees from factories own by Mustafa Koç's company attended the funeral en masse, with some carrying placards saying "goodbye, smiling boss." Security measures were high at the funeral prayers, which were attended by dignitaries, with every funeral-goer searched by X-ray devices set up at the mosque's entrances.

Koç was the scion of one of the most prominent and wealthiest families in the country and chairman of the conglomerate Koç Holding – whose subsidiaries account for some 9 percent of Turkey's exports and 8 percent of its gross domestic product (GDP) – since 2003, taking over from his father Rahmi Koç. He is survived by his wife Caroline and daughters Esra and Aylin.


Ali Koç is expected to succeed his brother as the new chairman of the business empire founded in the 1920s by patriarch Vehbi Koç. Vehbi Koç, who then started out as a grocer in the capital Ankara, established a string of companies in the following decades. His sprawling conglomerate has interests in almost all sectors, from automobile manufacturing to energy, durable goods production and financial services to a pastry shop chain. The company now has about 90,000 employees around the world and 12,000 dealerships.

According to Forbes list of the wealthiest people in the world, Mustafa Koç had a net worth of $1.05 billion, which put him in 1,712nd place.

Under his leadership, the conglomerate further boosted its revenues with new acquisitions and sales. In 2005, Koç took over 51 percent of Tüpraş, one of the largest industrial enterprises in Turkey and the country's only oil refiner, which was privatized by the government. Koç Holdings' revenue in 2014 amounted to $22.5 billion, and its profit totaled $900 million.

Apart from his business interests, Koç also served as honorary chairman of the Turkish Industrial and Businessmen Association (TÜSİAD), honorary consul of Finland, member of the Rolls-Royce Advisory Council and a congress member for Fenerbahçe football club. He was awarded the Cavaliere D'Industria Medal by the Italian government in 2005.