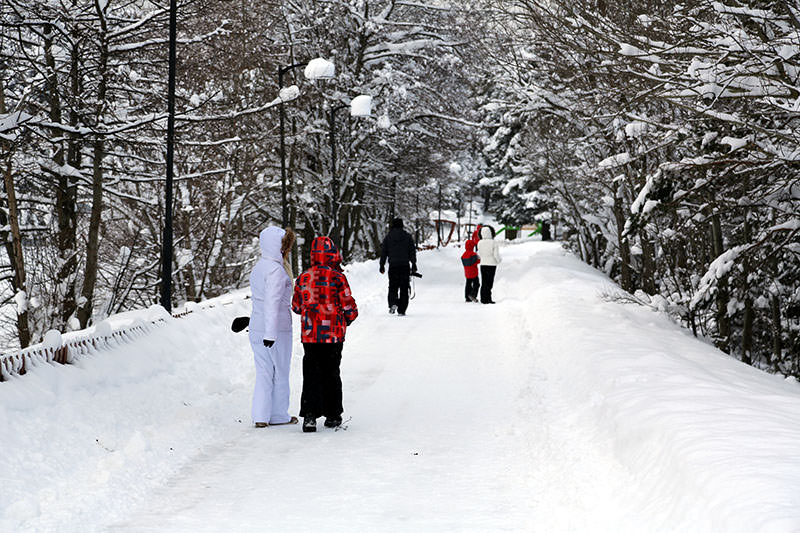 As winter takes hold, daily life has been disrupted by heavy snowfall and negative temperatures, leading to road closures in northern, central and eastern Turkey

Turkey has been in the clutches of freezing weather since the last week. Weather forecast shows no respite from winter conditions throughout the week, particularly for Turkey's central, northern and eastern regions, gripped by snowfall on Monday that led to the closure of roads and slowdown in traffic in various cities.

In the Black Sea province of Ordu, two days of snowfall have paralyzed daily life while crews have worked around the clock to clear snow, with the depth reaching 2 meters on hilltops. Snowstorms have complicated efforts, as workers raced to clear the roads, only to see them reburied under a blanket of snow.

The region has been in the grip of snowfall since last week but it has worsened over the weekend. Snowplows rushed to help emergency patients and pregnant women stranded in their homes, while snowfall affecting the utilities occasionally led to power outages and water shortages. Domestic flights to and from Ordu-Giresun airport were cancelled due to snowstorms.

Rize, another Black Sea province, was similarly affected by snowstorms. A strip of seaside highway straddling through the region saw traffic coming to a halt on Monday. Roads to hundreds of villages both close and far from provincial centers were closed across the northern regions of Turkey.

Elsewhere in the region, three people were trapped when their houses were buried under an avalanche in a district of Trabzon province. Two women and one man in their 60s and 70s were dug out alive from the snow after more than four hours of efforts by emergency crews. Three people stranded in a car with malfunctioning heating were rescued by emergency crews on a mountain road in the province of Karabük.

Temperatures for northern provinces were slightly above zero on Monday while forecast shows the highest temperature will be 3 degrees Celsius on Tuesday, with the lowest at minus 9 degrees Celsius for the northeastern province of Ardahan. Temperatures will slightly rise throughout the week but no major changes are expected in weather, except a change of snowfall into rainfall in the eastern Black Sea region on Friday and cloudy weather with occasional snowfall on Thursday.

Bad weather also took its toll on the eastern parts of the country, which is usually cold throughout the year. Hundreds of roads to remote villages were closed on Monday, despite strenuous efforts to clear the snow. Snowfall also led to closure of a main road connecting the provinces of Siirt and Şırnak. Authorities in Siirt said snow depth reached 3 meters in some village roads. Village roads were also closed in several central Turkish provinces, namely Tokat and Çorum, where access to 124 villages was cut off as of on Monday.

Snowfall also hit Istanbul, the country's most populated city, both over the weekend and Monday. Yet precipitation was not as dense as expected and the traffic was not heavily affected, due to a midterm break for schools that saw an exodus from the city to vacation towns.
Last Update: Jan 25, 2016 5:16 pm