Suspect wanted for killing wife, 8 others in southeast Turkey 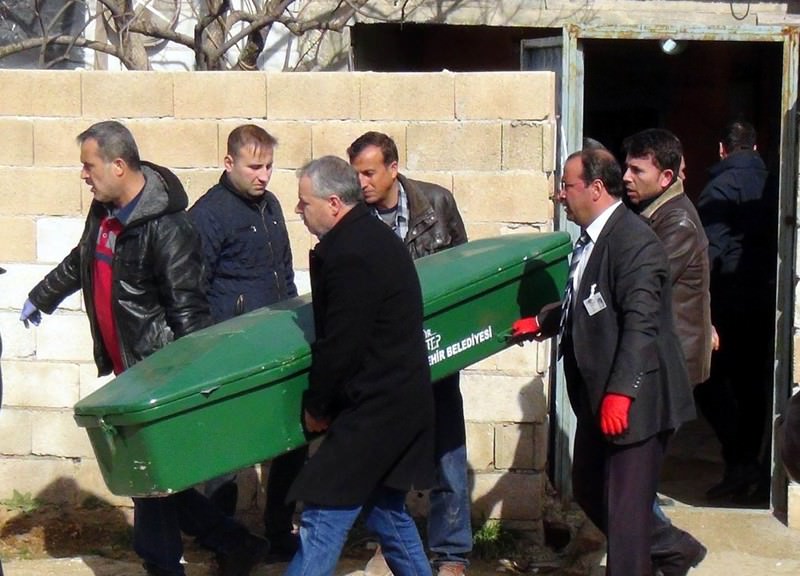 As bodies in coffins were carried away to be autopsied, police escorted family members of the suspect to safety after he threatened to kill more family members. (IHA Photo)
by Compiled from Wire Services Feb 06, 2016 12:00 am

A suspect accused of killing his wife, who filed for a divorce, along with eight others, including his relatives late on Thursday in southeastern Turkey, remains at large, while police relocated the remaining members of his family to undisclosed locations for security reasons

Gazİantep, a southeastern city bordering Syria, was rocked with the killings of nine people late Thursday. Yusuf Taş, a waiter residing in Istanbul, is the prime suspect in the murders and remains at large. He was reportedly angry at his wife Tuğba Taş planned to marry his uncle's son after she filed for divorce and traveled to his hometown, Gaziantep. He first stormed the house where 21-year-old Tuğba, who filed for divorce from the suspect six months ago, lived with her aunt. He opened fire on the residents, killing his wife, her aunt, a relative of his and the son of his wife's aunt. Two others in the house were injured. The couple's 3-year-old daughter Belinay was also in the house, but the suspect apparently did not shoot her.

Hours after the killings late Thursday, the bodies of five people were found in their home in Gaziantep when a colleague of Gül Taş visited her house when she did not show up for work at a textile workshop. Gül Taş was the wife of the suspect's uncle, and police discovered her body along with her husband and their children. They were all shot in their sleep. Police sources said the suspect later phoned his other relatives and threatened them by saying, "There will be more bloodshed; I will wipe you out." Police relocated all the surviving relatives of the suspect to safe houses, while a manhunt was launched to capture the suspect.

Media outlets reported that Tuğba Taş was considering filing an appeal to the police for protection from her husband.

The Doğan News Agency (DHA) reported that Yusuf was a former security guard and moved to Istanbul after he married Tuğba, a distant relative. His wife returned to her hometown of Gaziantep five months ago after she filed for divorce after arguing with the suspect. Media reports said Yusuf was apparently angry at his family for siding with his wife in the divorce, and he frequently threatened his own family. Eyewitnesses said Tuğba had refused the suspect's offer to meet and speak about the divorce, but her aunt let him in her house to talk. When his wife refused to talk, he returned with a shotgun and began shooting.

Police issued an alert, defining the suspect as "armed and dangerous," while the Istanbul Prosecutor's office launched an investigation into the killings. The incident comes amid rising concerns over lethal domestic violence and violence targeting women in general.

Turkey struggles to curb the disturbing trend of domestic violence, which has left more than 1,100 women dead over the past five years, according to figures released by nongovernmental organizations. The government has devised a new plan to prevent further cases with a road map that focuses on educating the public about violence, handing down harsher penalties to those who commit violence against women in particular, offering protection to women who have been assaulted and therapy for victims. The government also plans to increase the number of centers to monitor and prevent violence on a city-by-city basis and monitor women after they leave guest houses allocated to women fleeing domestic violence. For perpetrators, the government will offer treatment and anger management classes.

The incident was one of the bloodiest attacks in recent memory in Turkey involving relatives. In 2009, 44 people, mostly members of an extended family, were killed by six relatives raiding a wedding party in Bilge village in the southeastern district of Mardin.
RELATED TOPICS