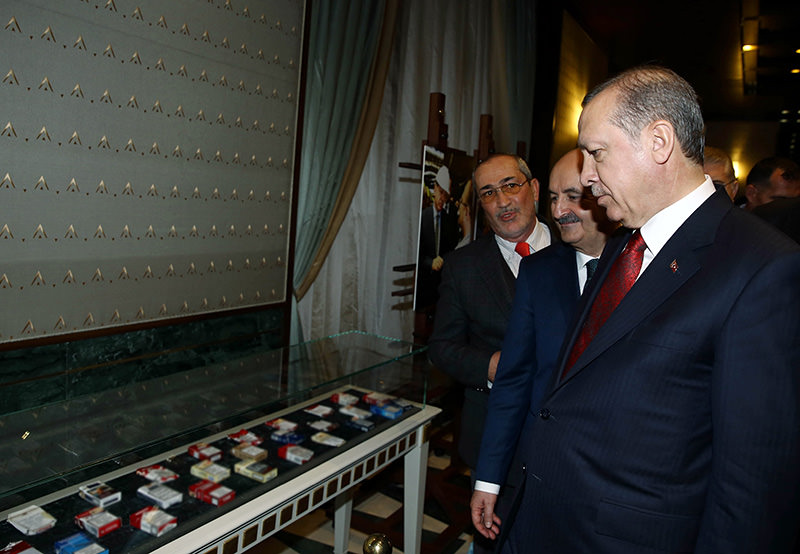 In a meeting with some 250 former smokers he personally convinced to quit, President Recep Tayyip Erdoğan vowed to continue Turkey’s fight against the unhealthy habit he personally oversees

Old habits die hard, but President Recep Tayyip Erdoğan is determined to put out his fellow citizens' unhealthy obsession with smoking. Erdoğan, a staunch teetotaler credited with the country's campaign to eradicate the tarnished image of Turks as chain smokers, hosted former smokers at the Presidential Palace on Tuesday. As he addressed an audience of some 250 former smokers, including some he personally convinced to quit the habit, he compared anti-smoking efforts to the war against terrorism and threw his personal support behind any project to wipe out the habit.

Erdoğan reportedly abhors being close to smokers and publicly he is known for conversing with smokers he comes across to persuade them to quit smoking. On several occasions he has advised smokers, either street vendors or a renowned journalist, to pledge to kick the habit and write this pledge down on a pack of cigarettes. Images of him grabbing a pack and handing out a pen to smokers were the subject of a photo exhibition the presidency hosted.

"It is my personal principle to fight smoking like I do against all harmful habits. The state has to protect its citizens against tobacco, alcohol and drugs, just like it is obliged to protect them against crimes from theft to terrorism," he said.

He reminded the public that the Health Ministry provides medicine to smokers to help them quit smoking. "In 2015, the ministry gave free medicine to more than 141,000 people, and since 2010, its hotline reached out to more than 23.5 million people and advised them on how to quit smoking," he said. The efforts will be stepped up this year, which the Health Ministry declared to be "Tobacco Control Year." In line with those efforts, Turkey plans to ban smoking in open spaces such as parks and gardens as well as the courtyards of schools and mosques. Smoking is already banned in any enclosed public space, from restaurants and bars to public buildings.

Erdoğan congratulated former smokers for "showing the will to quit."

He said it is his duty as president to protect people from smoking. "It is in the Constitution that the state should protect the people from bad habits, and as the leader of this state, I am personally obliged to do it," he said. Erdoğan said that their main duty should be protecting people's freedom from secondhand smoke, as they are "exposed to a danger they did not bring upon themselves on their own."

Turkey is now among seven other countries in the world imposing tobacco control measures or efforts to decrease the use of tobacco products, according to the World Health Organization (WHO). A WHO report released in 2015 showed a 12 percent decline in tobacco sales and a decline in the prevalence of tobacco smoking from 31.2 percent to 27.1 percent in four years.

Erdoğan said smoking habits have been on the decline in developed countries but it is still a rising trend in underdeveloped and developing countries. "Obviously, the tobacco industry looks to recover its losses in developed countries from developing markets. I believe the great financial power of this industry is behind everything encouraging smoking and drinking alcohol from songs and films to novels," he claimed, adding: "This was common in our country, especially in the 1960s and 1970s. You see smoking and drinking alcohol was always a part of the plots of films from this era."

He said that smokers are now being ostracized in developed countries, adding that smoking cannot be eradicated solely with fines or penalties. "We need a strong social conscience to achieve it. We have to warn every smoker, starting with our family members, relatives and friends, to encourage them to quit. We love them, we like them. You wouldn't let a loved one fall ill with a serious diseases, would you?" he said.

Abdurrezak Cansızoğlu, 51, a contractor from the eastern city of Bingöl, was among those invited to the Presidential Palace. He met Erdoğan when the president visited a mosque in Ankara three months ago. "He saw the pack of cigarettes in my pocket and told me to quit. I decided to give it a try and went cold turkey," Cansızoğlu, who used to smoke three packs a day, told Anadolu Agency (AA). "Now I can breathe and climb the stairs easier," he said.

Vahdettin Yüksel, 59, a smoker for 26 years, was aware of the president's fervent opposition to smoking. He tried to hide the pack in his pocket when the president entered his shop in Ankara. "I tossed it but it fell near a table and the president saw it. He asked whose pack it was and I admitted it was mine. [He said] 'Promise me, you will give it up,' and I promised. My conversation gave me the strength to try quitting and I succeeded," he said, boasting being a nonsmoker for five years.
Last Update: Feb 09, 2016 7:18 pm
RELATED TOPICS