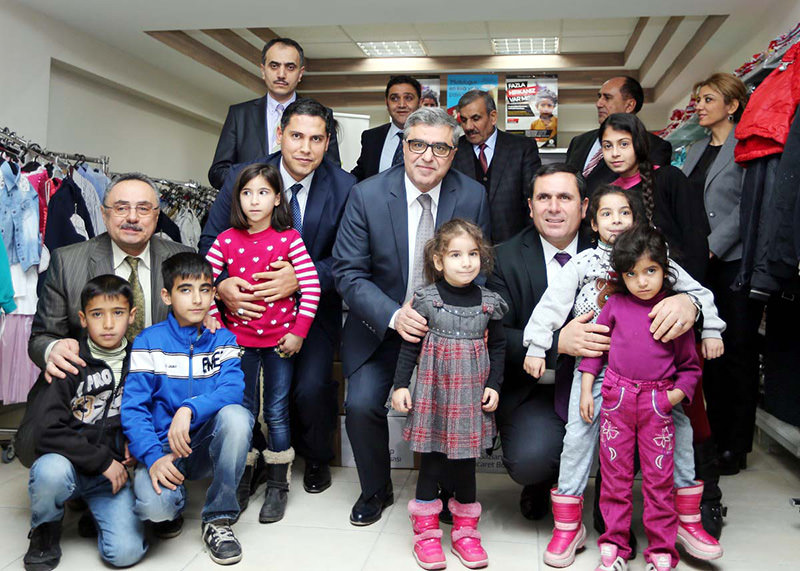 by Daily Sabah Feb 11, 2016 12:00 am
Turkey's southeastern city of Gaziantep collected more than 6,000 pieces of clothing in a campaign aiming to help Syrian refugees in cold winter days.

The "Do You Have An Extra Sweater?" campaign, initiated by the city's municipality and supported by the commodity exchange, office of mufti and provincial agriculture directorate, brought the city's institutions and people together to help the refugees fleeing from the five year long civil war.

Deputy Metropolitan Mayor Mehmet Durdu Yetkinşekerci said the result is an outcome of the city's common mind. Gaziantep Commodity Exchange Chairman Ahmet Tiryakioğlu said that many people call to participate in the campaign, and they pick up the contributions from given addresses.

The aim of the campaign is to reach more than 10,000 pieces of clothing.

Located some 40 kilometers north of the border with Syria and dubbed as the "twin" of the war-torn country's second largest city Aleppo, Gaziantep hosts one of the largest Syrian refugee communities in Turkey.

Due its developed industry and infrastructure, Gaziantep was among the primary choices of the refugees, to a point that has largely strained the city's economy, along with tensions with the local population.

More than 50,000 Syrians reside in the refugee camps inside Gaziantep province, in addition to hundreds of thousands living with their own means or with the help of their relatives, NGO's or official agencies. Recently, the province's governor stated that more than 350,000 Syrians live in Gaziantep, which has a total population of 1.7 million.

Turkey is home to more than 2.5 million refugees from Syria, making it the host of the largest displaced Syrian population in the world, as the nearest destination for millions fleeing the war. Only a small fraction of them - 269,672 according to the Prime Ministry's Disaster and Emergency Management Authority (AFAD) - live in refugee camps, while others live in cities all across the country, from border cities to Istanbul in the northwest.
Last Update: Feb 11, 2016 5:40 pm
RELATED TOPICS