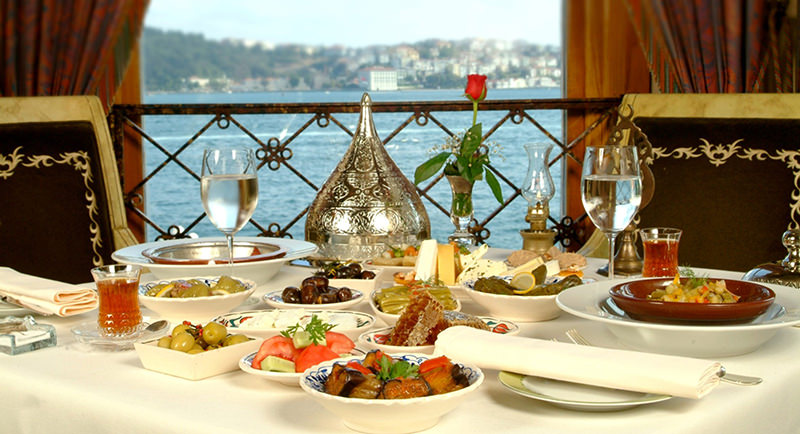 | Sabah Photo
by Anadolu Agency Feb 12, 2016 12:00 am
As Turkey tries to lower daily salt consumption, thousands of restaurants could be preparing to remove the much-maligned condiment from their tables.

An industry source speaking to Anadolu Agency on the condition of anonymity said the Istanbul-based All Restaurants and Suppliers' Association is planning to discuss this issue during an executive meeting at the end of this month.

"The association plans to take this step," the source claimed.

The association, representing 230 firms across Turkey, is also planning to come together with the country's Health Ministry.

This requirement entered into force Dec. 1 but the National Restaurants Association launched a lawsuit against the move, claiming that health regulators had overstepped legal boundaries.

The average American consumes 3.4 grams of sodium per day despite a recommendation of a 2.3 gram maximum, according to the Centers for Disease Control and Prevention of the U.S. Health Department.

Turks on average consume a whopping 18 grams of salt per day although the World Health Organization, or WHO, recommends a five-gram daily maximum.

In Turkey, this rate could increase to 25 grams in southeastern parts of the country where kebab culture has been dominant, according to Timur Erk, chairman of the Istanbul-based Kidney Foundation.

"This is too dangerous," he says.

Despite the current vogue for criticizing salt intake, the chemical compound of sodium and chloride is an essential nutrient.

It is required for blood, sweat, digestive juices and efficient nerve transmission, according to the U.S.-based Salt Institute.

People and livestock need to consume salt daily. Also, many companies use salt to preserve foods or to extend shelf-life of products especially ready-made foods.

Salt also was a cause of one of the most well-known nonviolent protests initiated by Indian independence leader Mohandas Gandhi. The Salt March of 1930 eventually paved the way for India's independence from the British Empire.

Despite the wide range of use and implications of salt, its proportional intake is vital for human health.

"It is a chemical after all. If you consume [too much], it is detrimental to your health," says Erk.

The WHO warns that excess sodium is linked to adverse health outcomes, including increased blood pressure.

In a bid to decrease sodium intake, the Turkish Health Ministry had announced a five-year roadmap in Nov. 2011. "Excessive salt consumption is unhealthy but changeable. That excess leads chronic illness," the roadmap document stated.

The ministry added that high blood pressure is a leading cause for cardiac diseases blamed for the deaths of many people.

Globally, it is a major risk for heart disease and stroke, the number-one cause of death and disability, according to the WHO. In 2014, 60 percent of Turkish people lost their lives due to heart problems or cancer, according to Turkish Statistics Institute.

In line with the roadmap, the Turkish government has revised food regulations including those on cheese and bread.

Last year, the Turkish Food Ministry announced that a salt reduction of between 35 and 61 percent would be introduced according to the kind of cheese. This regulation came into force on Jan. 1.

On bread, a similar regulation was introduced in early 2012. The salt content in bread has been cut to 1.5 percent from two percent.

Along with these foods, the ministry also published regulations on juice, olive and meat during the last four years.

Additionally, the Health Ministry tried to raise awareness among the public on the side effects of excess consumption of salt through meetings. In 2013, the Turkish National Lottery printed tickets featured warning against excess salt intake.

Turkish television broadcast short clips to caution people about side effects of salt on health.

In a statement to Anadolu Agency, the Food, Agriculture and Livestock Ministry said these efforts were paying off.

"The daily intake of salt was down by three grams. Turkish people [now] consume 15 grams of salt [on average]," the ministry said.

Erk from the Kidney Foundation claimed that such efforts have economic benefits. "We saved $1 billion as a result of this," he says, since medical treatment expenses have been cut.

The Health Ministry has signaled that the war against salt will go on unabated for years to come although it may not produce other roadmap.

However, it remains to be seen if Turkish customers will react to the possible disappearance of the salt shaker from their tables.
Last Update: Feb 12, 2016 1:21 pm
RELATED TOPICS