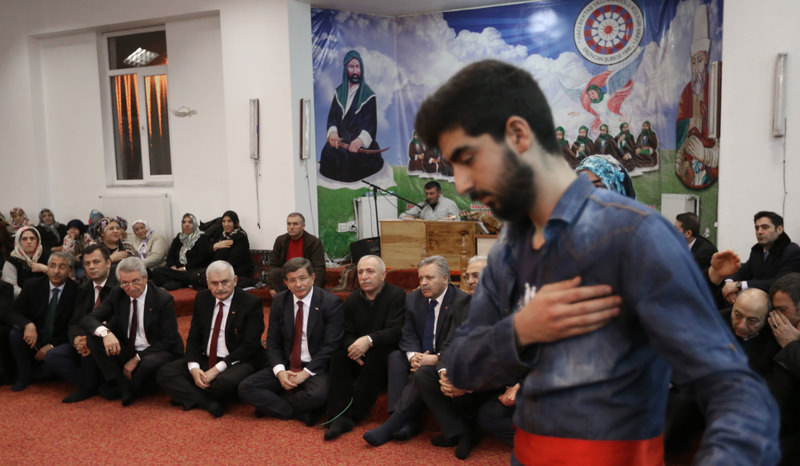 by Anadolu Agency Feb 15, 2016 12:00 am
Prime Minister Ahmet Davutoğlu visited Hacı Bektaş-ı Veli Anatolian Cultural Foundation and cemevi, an Alevi house of worship, during his visit to eastern Erzincan province on Saturday. Davutoğlu listened to the demands of the Alevi community and watched a sema ritual dance. He thanked the Alevi community who welcomed them to their cemevi and said that there are people who want to break things off between Sunnis and Alevis. "Whether they are Sunni or Alevi, if a person rejects to believe in God, he goes off the rails. Whoever rejects the path of Muhammad or Ali, he loses his path. Those you want to break us apart by identifying us Sunni or Alevi should know this and stop attempting to create any disagreements among us.

Davutoğlu said that Sunnis and Alevis achieved the independence of Erzincan together and if they had not managed to come together, Sunnis would not be able to pray in mosques or Alevis in cemevis. "When Erzincan was occupied by enemy troops, they did wrong to everybody regardless of them being Sunni, Alevi, Turkish or Kurdish. When earthquakes hit Erzincan in 1939 and 1992, everybody's houses collapsed. The wounds of the community in Erzincan were bound together. We will stand against whoever wants to break down this home and this feeling of unification out of our respect to Muhammed and Ali," Davutoğlu said.

He also said that being prime minister is a very hard task and he is responsible for people's rights, noting that he is working hard not to offend or hurt anybody. Davutoğlu pointed out that he visited Hacı Bayram-ı Veli, Abu Ayyub al-Ansari, Mevlevi and Hacı Bektaş-ı Veli lodges, and continued: "We kept our word to those whom we told will not pay any money when they visit Mevlevi and Hacı Bektaş-ı Veli lodges. We will continue to meet your needs. We have done many things and we will continue to do more. I have not come here to tell you what we have done so far, I came here to offer my congratulations for your new cemevi. God protect our country from all evil."
RELATED TOPICS