Syrians with work permits to earn as much as Turks 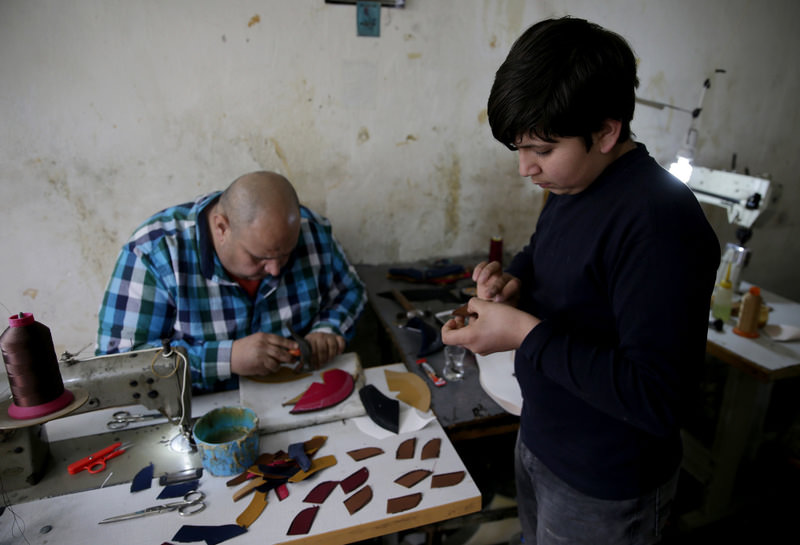 Khalid Bilal, a Syrian shoemaker, in his workshop in the western city of u0130zmir with his son. He is among the few Syrians with a steady income as he earns as much as TL 100 a day and complains of being forced to work illegally.
by Daily Sabah Feb 17, 2016 12:00 am

A Cabinet minister said Tuesday that Syrian refugees, recently granted work permits in Turkey, will be paid the same wages as their Turkish counterparts in a bid to prevent discrimination

Turkey introduced work permits to Syrian refugees last month, to the joy of hundreds of thousands of refugees, who faced an uncertain future after seeking shelter in Turkey. The move, lauded by the International Labor Organization (ILO), has raised concerns as to whether Syrian workers will be paid as much as Turkish citizens. Minister of Family and Social Policies Sema Ramazanoğlu put an end to the debate yesterday and stated Syrians will be entitled to whatever salaries "any Turkish citizen is entitled to."

Turkey currently hosts more than 2.5 million Syrians, who have fled the ongoing civil war in Turkey's southern neighbor. Only a small fraction of them reside in the refugee camps strewn along Turkey's border with Syria. The majority of refugees seek out a living illegally by working in temporary jobs, or depend on aid by state-run and private charities. With no end in sight to a conflict further aggravated by Russian airstrikes, they face bleak prospects and some feel compelled to leave for Europe to pursue a better life.

Addressing an event about female entrepreneurs, the minister said there was no possibility for Syrian refugees to return home in the near future. "Recent polls show almost eighty percent of our Syrian brothers and sisters plan to stay in Turkey for a long time. So, we have to base our policies on this finding. We issued work permits in a humanitarian context. Thus if a Turkish worker is paid TL 1,300, a Syrian worker will be paid the same amount for the same job," she said. The minister added that there wouldn't be a wage inequality "like in some European countries."

Ramazanoğlu said her ministry had started work on "an inventory" of Syrians, to discover their social status and how to help them. "We already have an existing integration process and we have to do it more systematically," she said.

Apart from work permits, the government seeks to reach out to more Syrians for their social inclusion. Ramazanoğlu said they especially sought to help Syrian women seek economic independence. Women will undergo vocational training and will be taught Turkish as part of these efforts. "This will help our Syrian guests' adaptation to the economy, social and cultural life in Turkey, and it will help by encouraging Syrian women entrepreneurship," she said.

Turkey has spent about $10 billion in assistance for Syrian refugees, and is frustrated over the lack of international aid, even though Turkey hosts the largest number of refugees from the war-torn country. Most Syrian refugees aspire to reach Europe through perilous, illegal journeys by sea and land from Turkey, due to low prospects of finding a steady income.

Work permits will definitely be a short-term solution for impoverished Syrians who have difficulty finding even temporary jobs. However it remains to be seen whether it would be an incentive to deter them from migrating to Europe, since they will not receive Turkish citizenship, although they have free access to healthcare and other basic services in Turkey.

This move will help to curb a thriving illegal labor market, where refugees are exploited as cheap labor.

The Turkish government's move to keep the salaries the same may also stave off criticism that the work permits for Syrians would affect the labor market in the country due to increased competition to Turkish manpower, as businesses tend to hire cheaper labor.

According to a joint study by the Ankara-based Hacettepe University and Confederation of Employer Unions (TİSK), as many as 400,000 Syrians work in Turkey and the ILO's Turkey office says one-third of working Syrians are paid lower than minimum wage and naturally go without the social benefits that Turkish workers enjoy. ILO Turkey director Numan Özcan said in a recent conference that more than half of the business owners they interviewed for a poll desired to employ Syrians, but language and integration problems hindered Syrians' chances of employment, either legally or illegally.
Last Update: Feb 17, 2016 1:09 am
RELATED TOPICS