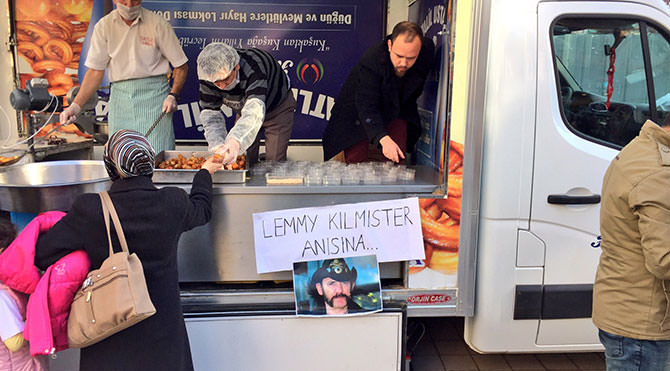 Loyal Turkish Motu00f6rhead fans distribute traditional lokma 'in memory of Lemmy Kilmister'.
by Daily Sabah with AP Feb 21, 2016 12:00 am
The news of "Lemmy" Kilmister's death, the Motorhead frontman whose outsized persona made him a hero for generations of hard-rockers and metal-heads, shocked fans from all around the world and Turkey was no exception.

In fact one passionate Turkish metal fan and his cousin paid the rock master a traditional Turkish tribute for his untimely departure.

on February 21. Ahmet Münir Bayer and his cousin Deniz Bayer decided to distribute 'lokma' –a type of traditional fried sweet dough- to their neighborhood in loving memory of their favorite band's front man, Lemmy Kilmister.

Lokma is a bite-sized fried dough soaked in syrup or honey and sprinkled with cinnamon. (The word lokma literally means 'bite'.)

Originally the two had decided to serve' lokma' on the 52nd day of Lemmy's death, which also has a special place in Muslim countries. Muslims tend to hold an Islamic memorial ceremony on the 7th, 40th and 52nd days of the death of their beloved ones.

Lokma is a part of a tradition called "lokma döktürmek" since the Ottoman times in Turkey. It's basically preparing, cooking and serving big amounts of lokma to large groups of people at special occasions like weddings, openings of workplaces/businesses and funeral ceremonies.

Bayer said that they decided to postpone their tribute due to the deadly Ankara bombing that took place on Feb. 17 and took 28 lives while wounding dozens.

Bayer, who is a civil engineer, stated that he had been listening to Motörhead since middle school and that the band was among the very few that had kept its original sound and stayed grounded.

Agent Andrew Goodfriend tells The Associated Press that Kilmister died on Monday in Los Angeles after a brief battle with aggressive cancer.
Kilmister had suffered numerous health issues in recent months. The band said that their frontman had learned of his cancer diagnosis just two days before his death.

Known simply as "Lemmy" to most, he was as famous for his mustache, mutton chops and the mole on his face as he was for his music.

But he was deeply respected and revered as a rock master and innovator, from his time with the seminal psychedelic band Hawkwind in the early 1970s to his four decades in Motorhead, best known for their 1980 anthem "Ace of Spades."

The band announced Kilmister's death on its Facebook page, describing him and "our mighty, noble friend" and urging fans to "...play Motörhead loud, play Hawkwind loud, play Lemmy's music LOUD. Have a drink or few. Share stories. Celebrate the LIFE this lovely, wonderful man celebrated so vibrantly himself. He would want exactly that."

Born on Christmas Eve, 1945, in Staffordshire, England, Kilmister founded Motorhead in 1975. Its bassist and lead singer ever since, Kilmister was royalty even among fellow rockers.

Ozzy Osbourne called him "one of my best friends."

"He will be sadly missed," Osbourne wrote on Twitter late Monday. "He was a warrior and a legend. I will see you on the other side."

Tall and lanky, with his distinct look, "Lemmy" lived rock music he was a regular at Sunset Strip rocker hangout The Rainbow and never stopped recording and performing. And he wasn't just culturally revered, he was critically acclaimed: Motorhead won a Grammy for 2004's best metal performance.
Last Update: Feb 21, 2016 8:26 pm
RELATED TOPICS