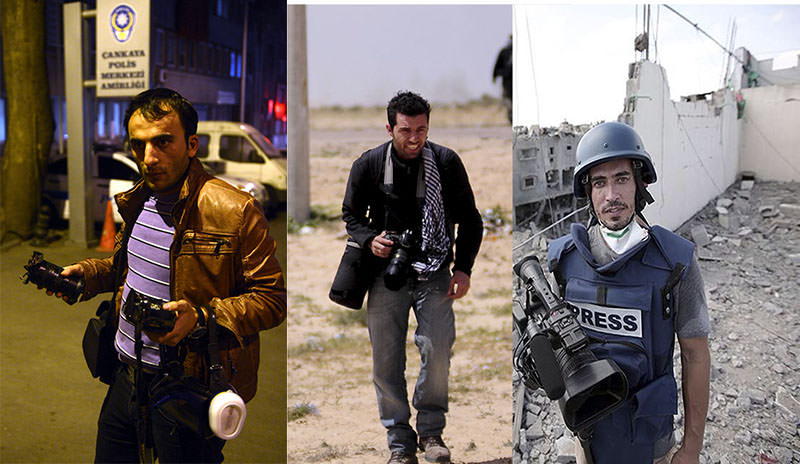 The three experienced reporters, who are also said to have been trained in war combat reporting, were working in Nusaybin at the time of their kidnapping.

Correspondent Rauf Maltaş, 31, photojournalist Onur Çoban, 36, and cameraman Kenan Yeşilyurt, 26, were assigned last week to cover stories in the region.  While they were reporting in the Yenişehir neighborhood, they were kidnapped on the grounds of "not having prior permission from the PKK in the district."

"We wish for a speedy recovery for our friends," Deputy Prime Minister Numan Kurtulmuş told reporters in northern Ordu province. Kurtulmuş went on to voice hope that the trio would soon be able return to work.

The Media Association, which brings together various Turkish media institutions, condemned the abduction of the AA reporters through a statement on Sunday.

The statement said that terror was among the primary threats against media, democracy and freedoms in Turkey but that these attacks were being largely ignored by a part of international media, professional associations, politicians, NGO's and journalists.

"We condemn media institutions which do not consider the abduction of their colleagues as newsworthy, or journalism associations that stand far away from picturing a responsible and common attitude," the statement said.

Family trapped in home for 80 days rescued in Sur

A family of six that was trapped in their home for nearly 80 days, due to ongoing terror clashes in the region, were rescued on Friday in an operation in the Sur district of Diyabakır province.

Having received requests from families to leave the district, the army ceased anti-terror operations for a while and planned an evacuation operation. Six people, one of whom was wounded, were rescued and transferred to a hospital.

The army released a written statement on Sunday, saying, "Six members of the separatist terrorist organization were killed in the operation," the statement said. The total number of terrorists killed in operations in the district reached 219 on Sunday.

In İdil, where the army has launched operations similar to those in Cizre, Silopi and Sur, four terrorists were killed on Saturday, according to a military statement. The total number of terrorists killed reached 10, the statement added.