An emotional farewell for Turkish soldiers killed in counterterror operation 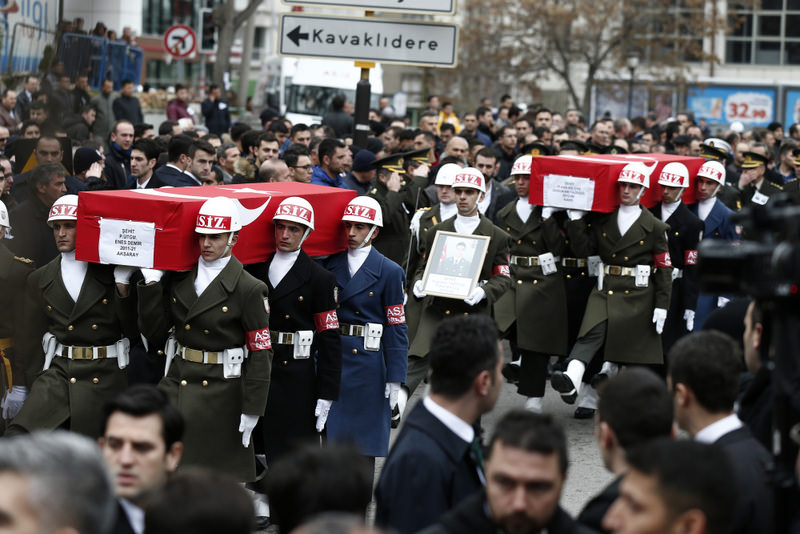 Honor guards carry the coffins of two slain soldiers (above). Prime Minister Davutou011flu joined the grieving relatives of soldiers at the funeral (R).
by Daily Sabah Feb 22, 2016 12:00 am

A funeral was held in Ankara Sunday for two military officers killed on Friday in the southeast when the building they were in during a counterterror operation collapsed. Prime Minister Ahmet Davutoğlu was among those comforting the grieving families at the emotionally charged funeral

Davutoğlu and his wife Sare Davutoğlu hugged and comforted the grieving family members of Demir and Tazegül, as coffins draped in Turkish flags were brought to Kocatepe Mosque in Ankara. Hüseyin Gümüş, another soldier killed with the duo when the building they were inside collapsed in the southeastern province of Diyarbakır, was buried in his hometown of Ordu in northern Turkey. 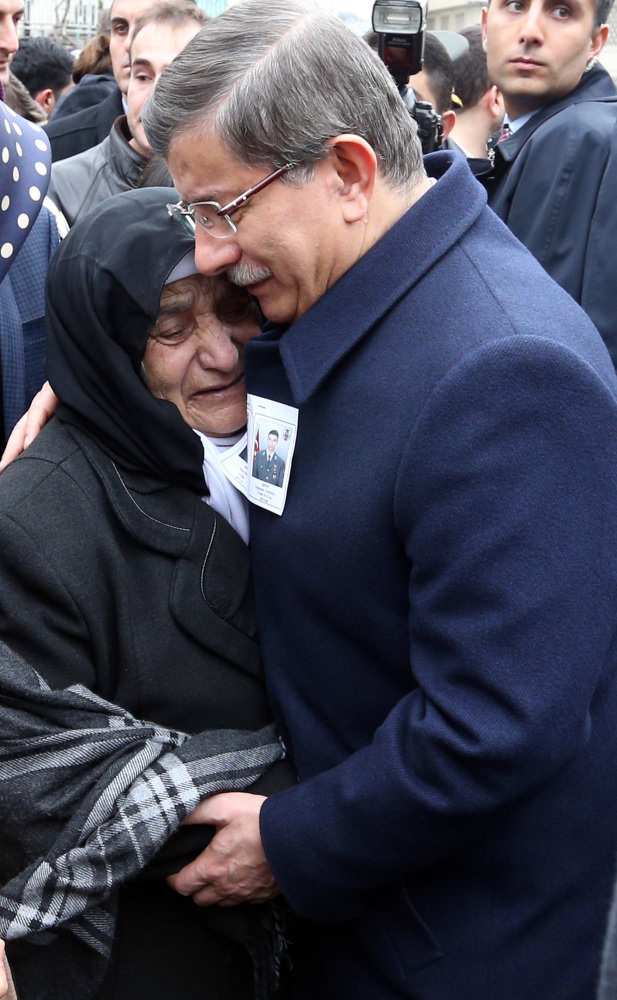 Prime Minister Davutoğlu joined the grieving relatives of soldiers at the funeral.

The media reported the soldiers were combing an apparently abandoned building once occupied by militants of the PKK terrorist organization when a bomb previously planted by the militants exploded, collapsing the building. However, the army did not confirm the report of the explosion. Emotions ran high in yesterday's ceremony, one of hundreds since last year, as coffins carried by honor guards entered the courtyard of the mosque. Davutoğlu held the hands of the fathers of the two soldiers throughout the funeral, while Sare Davutoğlu stood by and embraced Tazegül's sister, Zeynep.

Enes Demir was wounded in the face during another counterterror operation in the southeastern town of Cizre but refused an honorable discharge as an injured veteran and returned to duty. The young soldier's family members and Dutch girlfriend wailed throughout the funeral, but his parents were "proud to have a martyred son" they said during the ceremony.

Tazegül, 24, Demir, 27, and Gümüş, were part of a team of Maroon Berets, Army Special Forces deployed in the southeast in the face of rising violence and attacks by the PKK. The PKK is responsible for the killing of more than 200 soldiers and police officers, along with civilians, since it resumed its campaign of terror last summer. The Turkish Armed Forces announced that two soldiers were killed during counterterror operations in Diyarbakır's Sur where Tazegül, Demir and Gümüş were killed and another soldier was killed in Şırnak, another southeastern province, by the terrorist organization. Sur, a historic district that has a predominantly Kurdish population, has been the scene of violent clashes and attacks for months that led to an exodus of locals and multiple curfews. The government, which had initiated the reconciliation process to end the PKK's insurgency only to freeze it last summer, has pledged to wipe out PKK elements in the region and claims progress is being made in purging cities of militants. Though the government vowed to eradicate the terrorist presence in the southeast at least until spring, the terrorist organization still poses a threat to soldiers and police clearing the streets of cities and towns in the region, as they leave their positions after leaving booby traps behind.
RELATED TOPICS