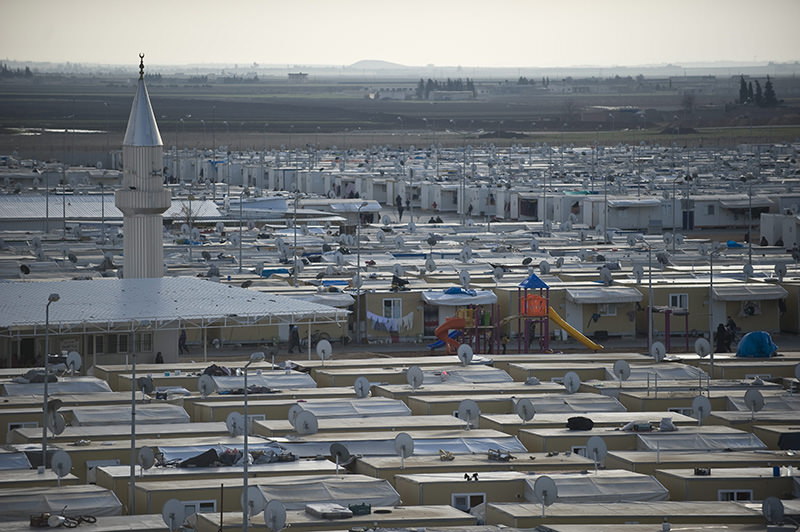 | AA photo
by Anadolu Agency Feb 22, 2016 12:00 am
The U.S. State Department Population, Refugees and Migration Office (PRM) has praised the Turkish town of Kilis, which has been nominated for a Nobel Prize for hosting Syrian refugees.

"One Turkish town has done so much for Syrian refugees it's up for the Nobel Peace Prize" the PRM official account tweeted sharing a link of a story on Kilis published on the Public Radio International website, a Minneapolis-based American public radio organization.

The article by Richard Hall praises Kilis for sharing the heavy burden of refugees as its population has already doubled as tens of thousands of Syrians have fled the war.

"For most, it is a stop on a longer journey: farther into Turkey or beyond, to Europe. But for more than 100,000 Syrians, it's the final destination or at least the place where they will wait out the war," Hall wrote in the article.

At least 250,000 people have been killed and 10 million displaced since the Syria conflict began in 2011, according to UN figures.

According to Turkish authorities Turkey hosts more than 2.5 million Syrian people, and has spent $9 billion so far on caring for those who have fled the war.

"People share their jobs, houses, trades and social spaces [with Syrian refugees]. I suppose that such an example of an act of mass peace does not exist in the world," Üstün wrote in his letter to the Nobel committee, according to the article.
Last Update: Feb 22, 2016 10:29 am
RELATED TOPICS