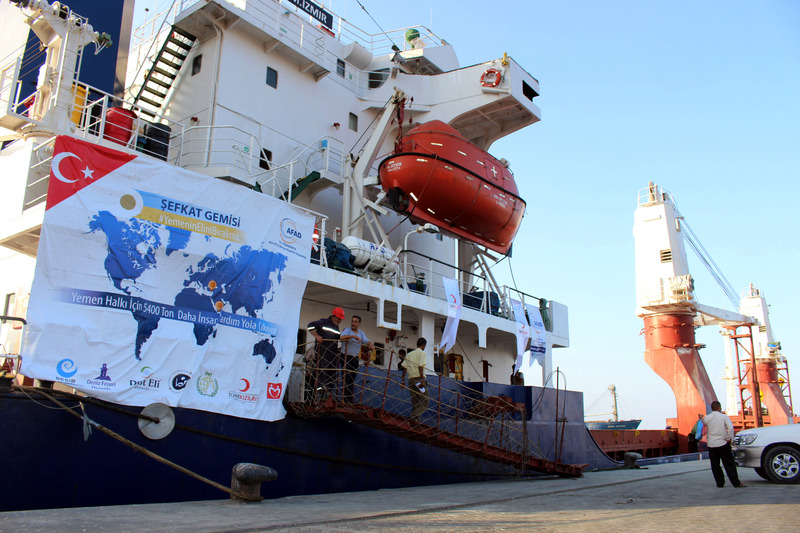 by Daily Sabah with AA Feb 24, 2016 12:00 am
A Turkish ship carrying humanitarian aid arrived in the Yemeni port of Aden on Wednesday as the population of the country on the Arabian Peninsula struggles in the face of ongoing civil war.

Mahmoud Awad Ahmed, a Yemeni provincial official, said the ship was loaded with 5,300 tons of food and medical supplies.

Yemen has remained in turmoil since 2014 when Houthi rebels overran the capital Sanaa, from which they have sought to extend their influence to other parts of the country.

Turkey supports Saudi Arabia's intervention in Yemen, although only verbally, but urges for a political solution to end the conflict.
According to figures provided by the United Nations, more than 6,100 people have been killed in Yemen since the Saudi coalition began its air campaign. About half of them are estimated to be civilians.

Mediation efforts by the United Nations to end the war have been fruitless and the latest round of peace talks between Houthis and government loyalists in January failed to find an agreement. Both have accused each other of violating a brief cease-fire coinciding with the talks.

Yemen is one of the poorest countries on the Arabian Peninsula with an economy further deteriorating because of the war and millions face hunger and disease due to lack of access to medical services. The United Nations refugee agency has said basic services across the country are on the verge of collapse and hundreds of health facilities are reported to have stopped functioning due to damage or lack of fuel.