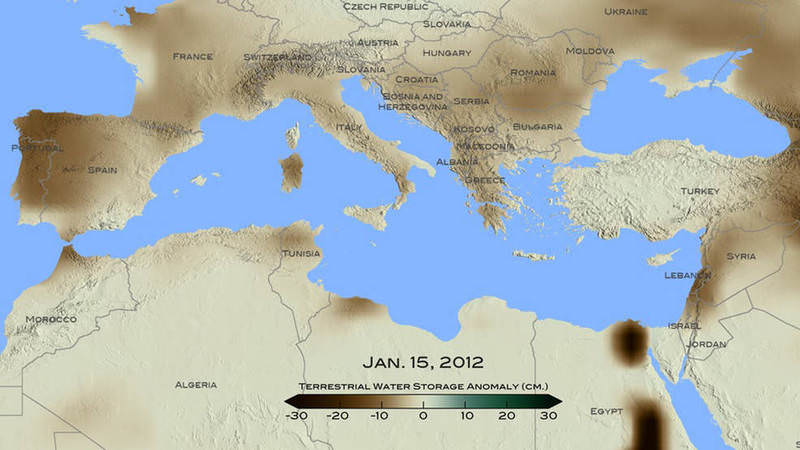 Turkey and surrounding countries in the eastern Mediterranean region have suffered the worst drought in 900 years, a new study by NASA's Goddard Institute for Space Studies says.

Turkey has multiple climates due to its diverse terrain, yet faces the risk of desertification, which like in other countries, stems from the onset of climate change that contributes to drought along with other factors such as the misuse of agricultural lands, harmful irrigation methods and other poor practices. More than half of Turkish soil has the characteristics of arid, semi-arid and semi-humid climates. Turkey's central and southeastern regions, known for their vast flatlands and steep mountains, are particularly vulnerable to the risk of desertification.

NASA scientists studied tree rings in the region to understand the climate and shifting of water to or from the area. Along with identifying the driest years, they sought patterns in the geographic distribution of droughts for a "fingerprint" for identifying the underlying causes, according to an online statement from the Goddard Institute.

"The magnitude and significance of human climate change requires us to really understand the full range of natural climate variability," said Ben Cook, the lead author of the study, according to a press release from NASA. "If we look at recent events and we start to see anomalies that are outside this range of natural variability, then we can say with some confidence that it looks like this particular event or this series of events had some kind of human-caused contribution to climate change," he added.

In order to address concerns about future droughts, the Turkish government initiated the "1,000 Artificial Lakes in 1,000 Days" project in 2012. Through artificial lakes, 1 billion cubic meters of water is to be stored and used for the irrigation of 2.5 million acres used for cultivation. Authorities are dismissive that Turkey is at great risk of drought in the near future, but nonetheless took precautionary measures. To prevent a potential food shortage in the wake of drought, the government encourages the growing of crops that are able to be cultivated in a short period of time and will offer subsidies to farmers affected by a drought, in the aftermath of a serious drought in 2013 that dealt a blow to grain yields.