Erdoğan vows to stand for women to protect their rights 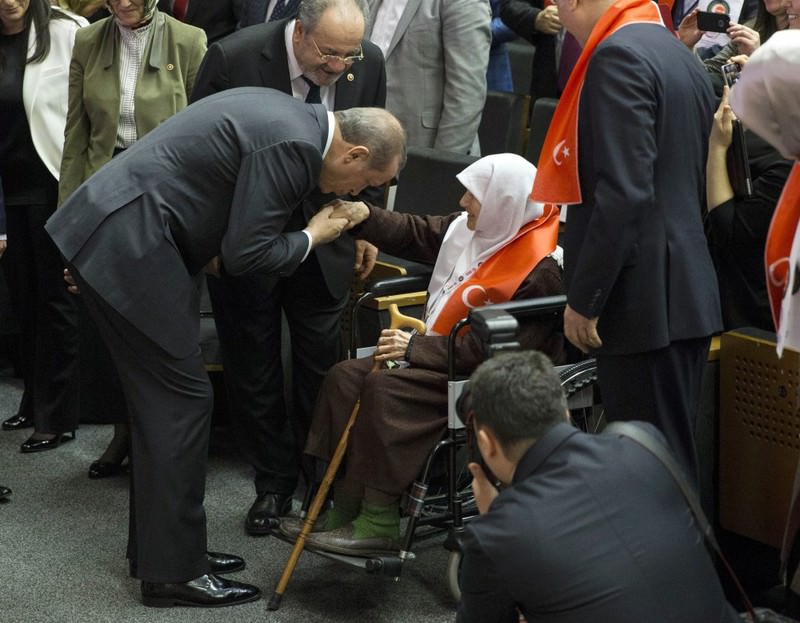 President Erdoğan underscored that the country is gaining pace in bolstering women's rights and status, personally vowing to ‘stand for women' while denouncing their 'objectification'

Turkey will join the international community to mark March 8 International Women's Day, but the latest figures from the Turkish Statistical Agency (TurkStat) show women still lag behind men in terms of employment and education.

President Recep Tayyip Erdoğan, meanwhile, highlighted what the government has done for women during his tenure in the past decade and underlined he would remain a champion for the protection of women's rights.

Speaking at a convention of women laborers organized by a labor union in the capital Ankara, Erdoğan said that he stands for women just as he stands for the oppressed against oppressors across the world. "To sustain its future, humankind should give women the value they deserve," he said.

The president heaped praise on female laborers and said they were "examples of how women can stand on their own, independently and how they can sustain their personality, faith and values without being objectified and exploited for their gender."

"In our faith and culture, people are viewed without discrimination based on their gender because we esteem human beings highly, regardless of their gender. So, women do not need any other protection as long as they are esteemed highly equally with men," he said.

He added that Turkey has progressed in terms of protecting working women's rights and said new regulations in favor of women's employment were enacted during his tenure as prime minister, defining the regulations as the "first of its kind" for affirmative action for women, aiming to achieve goals such as equal pay.

The president said the education rate of girls, an issue that has been plaguing the country for a long time, has increased over the past few years with new campaigns to encourage education. He emphasized that the schooling rate for girls rose to 97 percent in 2015 from 87 percent in 2007. Still, more is needed to be done as official figures indicate. Women in Statistics, a compilation of 2014 and 2015 figures related to women in Turkey and released yesterday, offers an insight into the country's female population and their position in society.

Women make up almost half of a population of more than 78 million people at 49.8 percent, though the number of women at the age of 65 and above is more than men due to higher longevity, according to statistics. Life expectancy at birth is 80.7 for women living in Turkey while it is only 75.3 for men. Tunceli, a quiet city in the eastern Turkey, stands out as the place with the highest life expectancy for women, at 85.7 years.

Nevertheless, the statistics show women suffer in other departments such as obesity. One in every four women is categorized as obese, TurkStat says, based on a nationwide health survey conducted in 2014. The percentage of obese women rose to 24.5 percent that year, from 20.9 percent in 2012, almost 10 percent higher than obese men.

In terms of education, the number of illiterate females is five times higher than males, according to 2014 figures. Illiteracy among women is largely blamed on a mindset that is common especially in rural Turkey, where girls are not sent to school and forced to either work or get married by their families. The country struggles to end the disturbing trend by campaigns encouraging families to enroll their daughters at schools, while a compulsory education system of 12 years was introduced in 2012. Parents not sending girls to school are fined for every day their child does not show up. Statistics show the rate of illiterate women in the overall population is 9.2 percent, while it is only 1.8 percent among men. Similarly, female university graduates make up only 11.7 percent of the population according to 2014 figures while men make up 16.2 percent.

The government had also launched a project titled "Women Deserve a Second Chance." The project, spearheaded by the government and Erdoğan's wife Emine Erdoğan, helped over 12,000 Turkish women who had dropped out of school to complete their education. The project offers free distance learning programs and courses for women to complete their high school education. The government provides financial support for women attending schools and courses including the daycare costs of their children and school fees.

Women also suffer from less employment opportunities compared to men. Among the population aged 15 and above, the percentage of women employed is only 26.7 percent for women, the 2014 figures by TurkStat shows.

Increasing women's employment rate to at least 35 percent of the workforce is among the ambitious 2023 goals of the government, alongside other plans to mark the centenary of the Republic of Turkey with a set of reforms. Still, women's employment rate remains under an average of 58 percent among the Organization for Economic Co-Operation and Development (OECD) countries. A draft bill aims to improve working standards for women and encourage more women to take jobs. It aims to boost salaries taking maternity leave without pay and keep their promotion options open even if they are absent for a long time for maternity leave. It also introduces a lax working scheme for women with newborn children without any cuts in their salaries.

Figures by TurkStat also point to the obvious: women with higher education have more participation in the labor force, at 71.3 percent in 2014.

As for politics, Turkstat says the proportion of female lawmakers was 4.5 in 1935 and has risen to 14.7 percent since then. It also points out women make up 7.4 percent of the cabinet. Women also secured more seats as mayors and the percentage of female mayors rose to 2.9 percent in 2014, up from 0.9 percent in 2009.

As for gender equality, a study by The Economic Policy Research Foundation of Turkey (TEPAV), an independent think-tank, shows that gender equality has improved in the country. Speaking at a press conference for the introduction of the study, TEPAV Director Güven Sak said Istanbul dominates the list of Turkish cities with the highest gender equality and equality has been improving in Turkey since 2014, as the country has secured 130th spot in a United Nations index on equality among 145 countries. TEPAV's gender equality index is based on women's employment, education rates and their representation in municipal councils, as well as maternal health statistics. The study's author Asmin Kavas Urul says gender inequality decreased in the three years between 2012 and 2015 and the Marmara region, where several industrial hubs and the country's most populated city, Istanbul, is located is where women are "most empowered."
Last Update: Mar 08, 2016 1:00 am
RELATED TOPICS