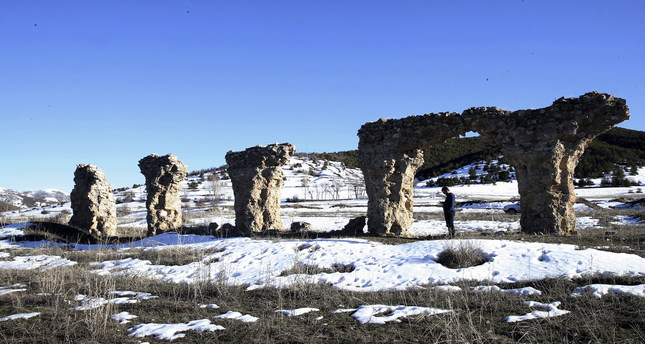 An application has been made with the Culture and Tourism Ministry for a surface research project which will uncover the ancient city of Satala in Gümüşane's Kelkit district.

According to historical records, the ancient city, located 28 kilometers from the district's center, was founded by the Roman military legion Legio XV Apollinaris as a military garrison. Functioning as a military post, the ancient city also played an important role in military history being at the crossroads of key military routes from Anatolia to Cappadocia and the Black Sea region. Serving as a strategic garrison during the reign of the Roman Empire, the city was ruled by Assyria, Macedonia and Byzantine. Roman Emperors Trajan and Hadrian are also believed to have visited Satala and, in the 15th century, an aqueduct, or water bridge, consisting of 47 holes was built in the city to bring fresh water to its residents.

Today, only one part of this bridge still exists. Despite the lack of artifacts available to archaeologists at the site, researchers excavated various artifacts such as gas lamps, ring stones, coats of arms, earthenware and various coins which are now displayed at the Istanbul Archaeology Museum. Notably, an Aphrodite bustier made of bronze is displayed at the London British Museum. In a statement, Kelkit Municipality Mayor Ünal Yılmaz said that academicians from Necmettin Erbakan University have already conducted research in the ancient city of Satala which is a protected archaeological site. Yılmaz said that they have submitted an application with the Culture and Tourism Ministry in order to continue this surface research in the ancient city based on the expert opinions of the Gümüşhane Governorate, Kelkit Municipality and academics.