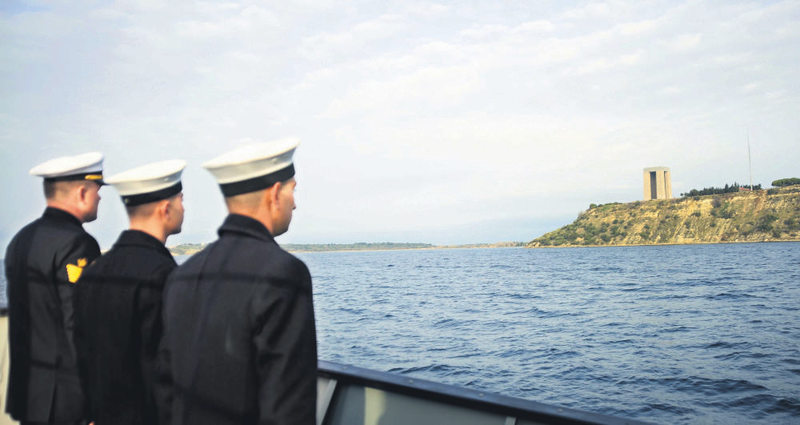 Turkey will mark on Sunday the 101st anniversary of the Gallipoli naval battle of World War I that stopped an Allied invasion of the Ottoman Empire and paved the way for the Turkish War of Independence. Officially known as Day of Martyrs and Çanakkale Sea Victory, the day will be marked with high-profile events.

The Ottoman Empire, which allied with Germany and Austria-Hungary in World War I, faced a major push from Allied forces seeking to control the Dardanelles, the gateway to Istanbul, which was then the capital of the Ottoman Empire, and the Black Sea from the Aegean and Mediterranean Seas. In February 1915, the British and French navies launched a massive attack on the strait, and the primary assault began on March 18, 1915. When battleships failed to seize the strait, the Allies dispatched troops that landed on the Gallipoli Peninsula in April 1915. This campaign failed as well, with heavy casualties sustained on both sides. The Allies' total casualties amounted to 46,000 soldiers and the Ottoman forces' casualties were 65,000, according to Turkish sources, although the exact number of casualties is still unknown.

The fierce campaign remembered as the Battle of Gallipoli - Gelibolu in Turkish - is located in Çanakkale and was the last major success fo4r the Ottoman army, which was rapidly heading to an inevitable collapse in the midst of the world war dealing a blow to the already crumbling empire reduced to the current borders of Turkey from a region-wide empire. The victory of the Ottoman army boosted the morale of the empire, and although it did not stop the eventual invasion of the country, it inspired the War of Independence led by Mustafa Kemal Atatürk, the founder of the Republic of Turkey, who was a commander in the Gallipoli battle. A mobilized public taking up arms managed to stave off advancing Greek forces four years after the battle and Turks finally regained independence after treaties for the withdrawal of invading forces in 1921 and 1923.

A series of events will be held today at the site of the battle, which is now a memorial ground and home to the graves of the thousands who died fighting. The country's senior leaders, including President Recep Tayyip Erdoğan, are expected to attend the ceremonies. Wreaths will be laid at the Monument of Martyrs on Gelibolu Peninsula and the public will visit the graves of soldiers who flocked from many parts of the Ottoman Empire to fight. The Turkish military will stage a parade of troops and naval vessels while Turkish Stars, the Army's aerobatics team, will perform for the occasion.