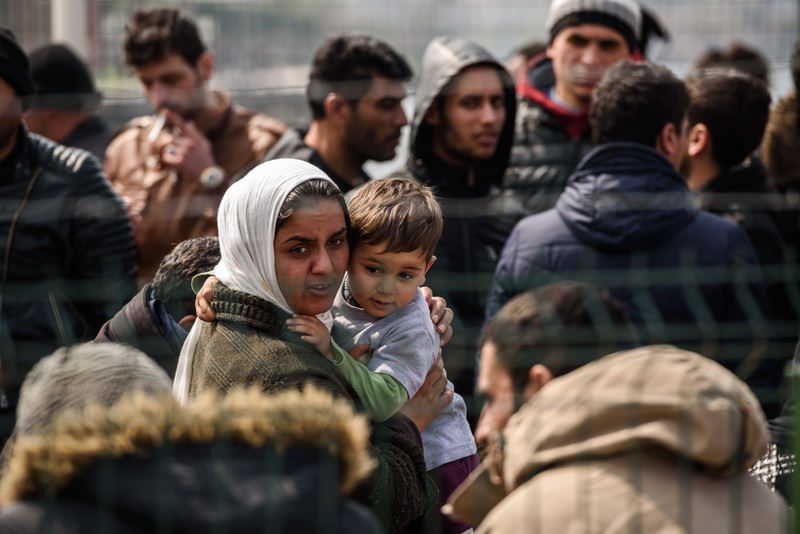 Hours after an agreement between Turkey and the European Union to send back refugees traveling to Europe from Turkey came into force, boats still full of refugees were visible off Turkish shores. "Everyone says it is the last day, but this is not the end for us," Arafhani Kawaj, a 28-year-old Afghan refugee told Doğan News Agency (DHA) after his third attempt to reach the Greek islands from a Turkish beach failed when the boat he boarded took in water and the refugees had to return to the coast. Kawaj, who arrived in Turkey one year ago, says his ambition is to find a steady job in Europe. "We will not rest until we find a job and a better life there. I will try again soon," he said, as he joined others in his group trying to warm themselves around a fire they started on the beach amid chilling weather in the town of Bodrum.

Kawaj was among hundreds who flocked to the shores over the weekend as the deadline for the deal ended. Turkey agreed to take back all migrants and refugees who cross into Greece via its territories illegally by sea starting from March 20. Refugees will be transferred to Turkey once they are registered and their asylum requests are assessed by EU authorities. The country struck the deal after tense negotiations with leaders of EU states looking to fend off the increasing influx of refugees, especially those from war-torn Syria. The continental body agreed to take in thousands of Syrian refugees from Turkey with direct flights in return, and pledged to fund services for refugees in Turkey, whose number amount to more than 2.7 million, such as education. Turkey, which has strove to join the EU for decades, is also being offered visa-free travel for its citizens as well as promises that new chapters in Turkey's EU membership process will be opened.

It is apparently a tentative deal at best with many in Europe voicing reservations about the benefits of the agreement, while Ankara says the refugee crisis cannot be solved without an end to the conflict in Syria. The government is also urging the international community to be more proactive to restore peace in its southern neighbor. Until then, refugees may remain a common sight on the long stretch of Turkey's Aegean coast a few sea miles away from small Greek islands dotting the sea, the easiest yet most dangerous route for them. At least 362 migrants died in the Eastern Mediterranean region including Aegean Sea in the first three months of 2016, according to the International Organization for Migration (IOM). Deaths are linked to bad weather that is prevalent despite the onset of spring and faulty dinghies overcrowded with migrants.

Kawaj boarded one such boat, which was accompanied by three others. Only one boat managed to reach the island of Kos while others started taking water only 10 meters off the Turkish coast, and 40 aboard had to wade toward the beach before leaving for central Bodrum in southwestern Turkey - hopeful for try again on a better day with a better boat. On another beach in Bodrum, a yacht reportedly carrying 60 Syrian migrants ran aground after it fled the Greek coast guard en route to an island on Saturday night. Also on Saturday night, two went missing when a fiberglass boat carrying 25 Syrian refugees sank off the coast of Ayvalık, a town in the northwestern Aegean region. The Turkish Coast Guard rescued the survivors who said the boat sank due to overcrowding.The Coast Guard is at the forefront of life-saving operations for refugees who risk their lives every day. It increased its patrols in the rough sea after the agreement came into force. Coast Guard Commander Adm. Hakan Üstem was at a garrison of a Coast Guard unit in Dikili, a beach in the western city of İzmi

r popular among migrants for Aegean crossings. As Üstem inspected the troops, the Coast Guard said 320 migrants were intercepted yesterday as they departed Dikili for Greece. The number adds to more than 17,880 migrants intercepted in the Aegean by the Coast Guard between Jan. 1 and March 18. On Friday, 1,734 migrants from various countries were captured by troops, and 101 others were intercepted hours before midnight off the coast of Çeşme, another town near İzmir.

On the other side of the Aegean Sea, migrants aboard 12 boats arrived on the shoreline of the Greek island of Lesbos in the early hours of Sunday, Reuters reported. Hussein Ali Muhammad was among the refugees who managed to reach the island. Muhammad told Reuters he was aware of the EU agreement, adding: "I hope to cross these borders. I hope I complete my studies here [in Europe], just this. I don't want money, I just want to complete my studies. This is my message." Mohammed, a 30-year-old computer engineer from Daraa, Syria, told Reuters he hoped to stay in Greece until he found a way to be reunited with his family in Germany. "I know the decision. I hope to [be with] my wife and children," he said. Gatan, a Syrian who had just arrived with his wife and two children, told Agence France-Presse (AFP) he had chosen to ignore warnings about the deal. "In Turkey, they told us not to go to Greece, that we risk arrest by the police," he said. But he added: "We could not stay in Turkey. We want to go to Germany or France."

UNHCR, the United Nations refugee agency, says at least 144,000 people have arrived in Greece in 2016, and more than half of them are women and children.