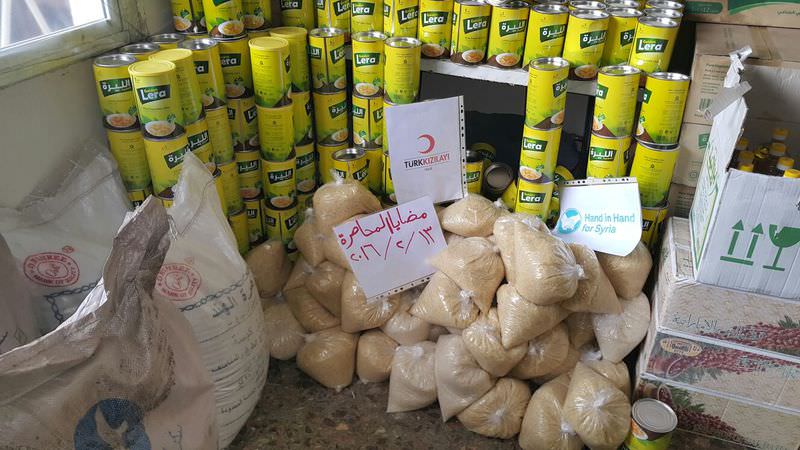 Turkish Red Crescent has been providing humanitarian aid to families in Syria's Madaya, which has been under the siege of Assad regime forces and Hezbollah militia since July 2015, facing a continuous humanitarian tragedy.

The Turkish Red Crescent has supplied aid to more than 400 families, which were determined to be the most in need, in cooperation with local civil society groups, Red Crescent officials said in a press release. The aid packages delivered to families include baby food, milk, sugar, flour, rice, bulgur, dry beans, and canned fish and other food supplies.

The siege imposed on Madaya was lifted upon international pressure, but the regime forces and the militia have recently re-imposed it.

"There is a major humanitarian tragedy being experienced in Madaya. We urge all the parties to comply with international humanitarian law. The doors must be kept open continuously for humanitarian aid," the officials said.

"In particular, the channels to those in most need of protection must be kept open. We have supplied 150,000 TL aid to those in need for now and the help will continue," they added.

According to the U.N. World Food Program, roughly 485,000 people in 18 besieged areas of Syria -- the most notable of which is Madaya -- face rapidly deteriorating conditions due to the lack of humanitarian assistance.

Those 18 besieged areas are: Madaya, Muaddamiyah, Eastern Ghouta, the Yarmouk refugee camp, Zabadani, Jayrud, Kanakir, Tadamun, Hajar al-Aswad and Darayya (all in Damascus); Talbiseh, Rastan, Houla and Vaer (in Homs); Fua and Qafraya (in Idlib); and the center of Deir al-Zour province.