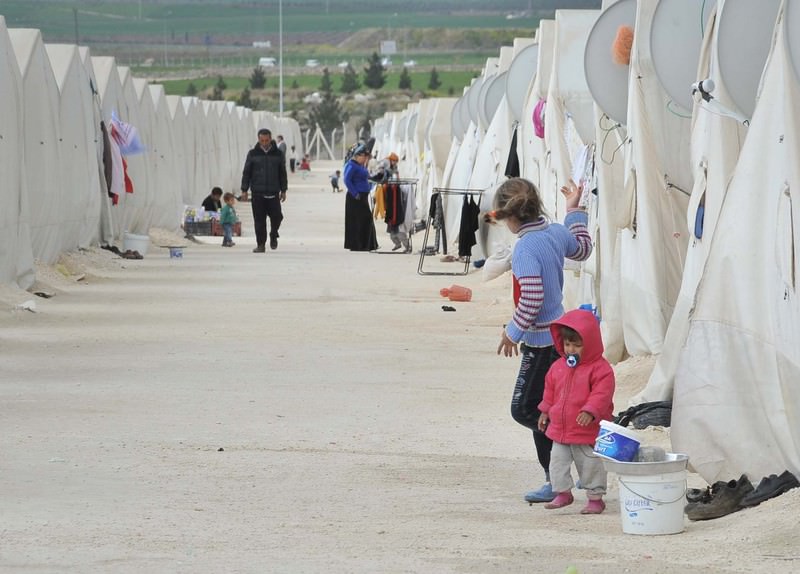 Although Turkey has been extolled for its unprecedented embrace of refugees, the two opposition parties cooperated in a local protest against the construction of a new refugee camp for displaced Syrians. Lawmakers from the main opposition Republican People's Party (CHP) and Peoples' Democratic Party (HDP), which ran in the last election on a platform championing equality for all, rallied on Sunday in the southern province of Kahramanmaraş against the camp, in the latest string of protests in the province.

Turkey's hosting of refugees in state-of-art camps is praised by the international community, and Kilis, a small Turkish town bordering with Syria, is seeking a Nobel Peace Prize for the exemplary coexistence of locals with a large number of refugees. But the refugees are not without a few antagonists, namely from the CHP, whose leader Kemal Kılıçdaroğlu was criticized for pledging last year to send back refugees if his party comes to power, before retracting his remarks.

Dulkadiroğlu, a town in Kahramanmaraş has been scene of protests since March by a small group of locals opposing the camp, and lawmakers occasionally join the group. Mahmut Toğrul, a HDP deputy and Ali Öztunç, a senior CHP official, were among lawmakers attending Sunday's protest. The protest turned violent when the group attempted to occupy the construction site and confronted security forces blocking them. A group of rioters hurled stones at gendarmerie troops and journalists covering the protest. Two soldiers and two journalists were injured while assailants among the group threatened a cameraman from the state-run Anadolu Agency and broke his camera. Kahramanmaraş was among the few Turkish cities where violent protests against refugees erupted two years ago, when the number of refugees started swelling. Anti-Syrian protests broke out in quick succession in the province and several other cities bordering with Syria with angry mobs attacking the houses and shops of Syrians before similar attacks suddenly died down, raising suspicion of a plot to incite public against the refugees.

Protesters justify their opposition with ethnic composition of refugees and claim the camp's location in a predominantly Alevi neighborhood may stir resentment among the local community. Alevis belong to a faith shared by Syria's Bashar Assad and supporters of his regime, while Sunnis make up a majority of the refugees, who face repression under the Assad regime.

Kahramanmaraş is already home to a refugee camp where 18,497 Syrians stay, according to the latest figures.

In an earlier protest, Ali Haydar Hakverdi, an Ankara deputy for the CHP, said locals were concerned about their safety. "We don't know who will live in this camp. People will be disturbed," he told the media. Birol Ertem, another CHP lawmaker from the province of Hatay where six refugee camps are located, said refugees posed a serious threat to locals, echoing the xenophobic criticism facing refugees in Europe.

The CHP is accused by the ruling Justice and Development Party (AK Party) government of siding with the Syrian regime. The party came under harsh criticism in 2013 when it sent a delegation to hold talks with Assad.

The party also opposes an EU-Turkey deal for the resettlement of refugees in exchange of funds to cover the needs of refugees in Turkey. Kılıçdaroğlu has called for Ankara to give funds to the EU instead, saying Europe should take all the refugees from Turkey. This was the CHP leader's latest salvo targeting Turkey's embrace of refugees. In an election rally last year, he pledged that he would send all refugees back to Syria if he comes to power, causing a public outrage for remarks which according to his critics amount to xenophobia. In 2014, Kılıçdaroğlu accused the government of "committing treason" by accepting refugees from Syria.

Turkey hosts more than 272,000 Syrian and Iraqi refugees in 26 camps located in the country's border towns with Syria, where an ongoing conflict left hundreds of thousands of people displaced. Those in camps are only a fraction of the 2.7 million refugees in Turkey.

Turkey still remains the safest haven for refugees, who streamed into the country with few possessions, little or no money and no place to call home. Though Lebanon and Jordan, Syria's other neighbors, have also accepted the displaced, Turkey is lauded by the international community for offering the best accommodation standards to the refugees. The country, although seasoned in hosting refugees as a transit country for migrants from Asia and the Middle East heading to Europe, was apparently unprepared when the exodus of the displaced from Syria started. Still, it managed to mobilize quickly, and tent camps established to host the early arrivals were rapidly upgraded to small neighborhoods with proper housing for refugees.
RELATED TOPICS