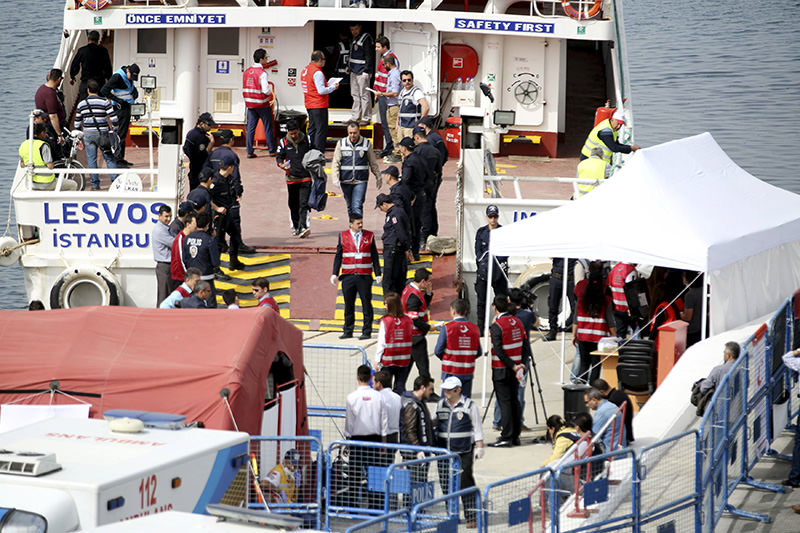 Greece deported two batches of more than 100 migrants to Turkey on Friday, the second such action carried out under the EU deal to stem mass irregular migration to Europe. Sources said the first boat left the Greek island of Lesbos carrying 45 Pakistani men while a second carried 79 migrants, also mainly Pakistanis, back across the Aegean Sea where hundreds have lost their lives in quests to reach Europe.

As the ship anchored at the port of Turkey's western resort town of Dikili, police and migration officials recorded the migrants' entrance and carried out health checks. The migrants are to be transferred to the readmission center in the northwestern province of Kırklareli. A small group of activists leapt into the water at the port of Mytilene, clutching the anchor of the first ferry in an unsuccessful bid to stop the deportation effort that rights groups have criticized.

The downcast migrants, clutching blankets and with small backpacks on their shoulders, were escorted off the vessels by security officials.

Meanwhile, several European foreign ministers were heading to Greece and Turkey on Friday to discuss the latest developments in the migrant crisis, Dutch officials said.

The deportations are taking place under a deal between Turkey and the European Union, which is straining under the pressure from the unprecedented flow of migrants into its territory. Turkey is a main launching pad for migrants fleeing war and poverty in North Africa and the Middle East, many of whom are from Syria, for a better life in Europe.

Turkey has promised to take back all irregular migrants landing on Greek islands since March 20 while Europe has agreed to resettle one Syrian refugee directly from camps in Turkey for each Syrian deported. The threat of deportation is to discourage people from making the often deadly crossing in flimsy boats.

The transfers began Monday when some 200 migrants returned to Turkey, but then stalled after a last-minute flurry of asylum applications by those desperate to avoid expulsion.

While concerns remain over the deal, Germany – Europe's top destination for refugees – said it had "got off to a good start." Interior Minister Thomas de Maiziere announced that asylum applications had dropped 66 percent in March. "In December 2015, it was 120,000 people, in January 90,000, in February 60,000 and in March 20,000," he said.

German Chancellor Angela Merkel, whose country took in 1.1 million asylum seekers last year, said Thursday she was "very happy" with the way the migrant crisis was being tackled.

The drop in migrant arrivals appears largely due to much-criticized border closures in the Balkans, as well as an increased clampdown by Turkey on people smugglers.

Turkish state media said this week that 400 smuggling suspects had been arrested so far in 2016, and more than 65,000 migrants intercepted at sea and on land.

While Europe appears to be getting its side of the bargain, President Recip Tayyip Erdoğan warned the EU Thursday that its promises should be met. "There are precise conditions. If the European Union does not take the necessary steps, then Turkey will not implement the agreement," Erdoğan said. Turkey is to receive benefits, including visa-free travel to Europe for its citizens, promised "at the latest" by June 2016. Turkey is also to receive 6 billion euros ($6.8 billion) in financial aid up to the end of 2018 for the 2.7 million Syrian refugees it is hosting. Turkey's long-stalled accession process to join the EU is also supposed to be re-energized under the accord.

Parliament on Thursday night approved a bill on a readmission agreement with the Pakistani government, paving the way for those who get sent back from Greece to Turkey to be deported to Pakistan.

Dozens of migrants on Samos and Lesbos also claim to have begun a hunger strike to prevent their expulsion and demand the reopening of borders shut by Balkan nations last month.

One Pakistani hunger striker collapsed in Moria, the main camp on Lesbos, and was taken for treatment by medical charity Medecins du Monde.

In addition, a Pakistani held on Samos told AFP that a dozen of his countrymen were on hunger strike there. "They told us to apply for asylum in Greece and that if not, we are going to be sent back to Turkey. We risked our lives to come here. We don't want to go back to Turkey because they are going to send us back to Pakistan. We don't want to apply for asylum in Greece, we want to go to Germany," Ali said.