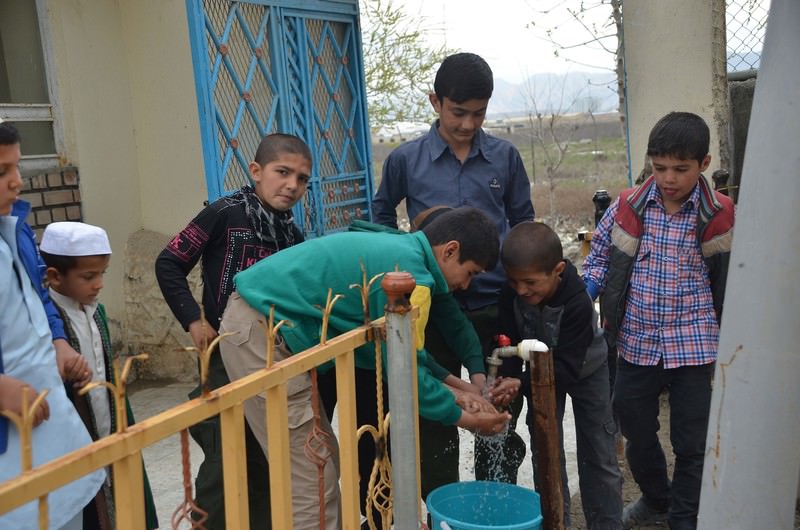 by Daily Sabah Apr 12, 2016 12:00 am
A project by a state-run agency has provided access to clean drinking water for about 10,000 people in Afghanistan. The work was undertaken by the Turkish Cooperation and Coordination Agency (TİKA), known for its development aid and charity work across the world, and consists of several water wells and a water tank in the Afghan capital of Kabul.

Built in a low-income neighborhood in Kabul where infrastructure has been stunted due to poverty and conflict, and water access lacking, increased provision of clean water is a significant event. Only 55.3 percent of the population has safe drinking water, according to a study by the WaterAid non-profit organization.

The work includes a water well drilled 250 meters into the ground and installed near a mosque in the neighborhood, thereby also providing clean water for ritual ablution, which necessitates the use of pure water, to the Muslim faithful.

Gen. Cahit Bakır, commander of the Turkish army's task force deployed at Kabul airport, inaugurated two projects at a ceremony yesterday. Bakır said the friendship and amity between Turkey and Afghanistan that were established by Mustafa Kemal Atatürk, founder of the Republic of Turkey, and Amanullah Khan, Afghanistan's former ruler, were still continuing to blossom.

"Turkey carries out projects in different sectors in Afghanistan and I think the most important of them are for water and sanitation. These provide a lifeline for the people of Afghanistan," Bakır said.

Turkey and Afghanistan have enjoyed close ties since the early days of the Republic of Turkey and modern Afghanistan. Turkey was the first country to open a diplomatic mission in Kabul in 1921. Since then, the country has maintained relations with Afghanistan, especially in support of security. Turkey actively contributes a NATO mission in the country.

The state-run TİKA, a formerly little-known organization founded with the purpose of helping former Soviet republics after the collapse of the Soviet Union, has re-branded itself over the past decade as a major source for Turkey's international clout by helping other countries develop and reaching out to people in need across the globe.