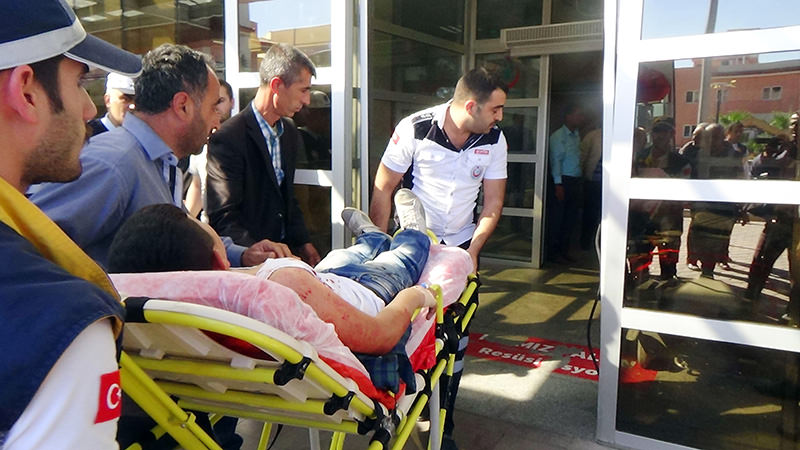 The fifth rocket believed to be fired from al-Bab district under Daesh control in northern Syria landed on a two-storey building's rooftop located in Hakverdi neighborhood of Kilis city center, killing three Syrian nationals and injuring five others. Kilis Governorate said in a statement that the dead were all children.

The third and fourth rockets fired across the border landed in an empty field near a primary school located in Yavuz Sultan Selim neighborhood on the outskirts of the city facing Syria. 40-year-old shepherd Kamil Cerruh, who was a Syrian national, succumbed to his wounds in Kilis State Hospital, while 14-year-old student Mehmet Sarıbuğday was injured. Around 10 sheep also perished in the blast.

However, it was a near miss as classes were still in session at a school located near the blast site, which was evacuated after the incident and police sealed off the area. With recent casualties, the stray rocket death toll in the city increased to eight, while dozens were injured in explosions.

Earlier in the day, one of the shells reportedly struck a building located at the compound of Kilis State Hospital which is also located on the outskirts of the city facing Syria. The first rocket was fired at around 2.45 p.m. local time and hit the hospital's oxygen supplier building. The fire department was dispatched to the hospital to investigate if there was a possible oxygen leakage.

The second rocket on the other hand, was fired about 10 minutes later and hit an olive grove in the region. The rockets did not explode and luckily nobody was injured.

The distance between Kilis city center and the Syrian border is less than four kilometers in some areas. The rockets are believed to have been fired from a Daesh-controlled region in Syria.

Again on Monday, artillery shells fired from Syria landed in a field in southern Yayladağı district of Hatay province.

According to the Defense Ministry, Turkey's retaliatory strikes to gunfire from Syria have killed 362 militants and wounded 123 since Jan. 1, 2016.

Prime Minister Ahmet Davutoğlu pledged last week that attacks from Syria would be retaliated against. "We will take all measures for the security of our citizens and we will leave the perpetrators of the attacks unable to further their attacks soon," he said. Media outlets reported that Davutoğlu signaled a new plan to drive Daesh from the Turkish-Syrian border. The Sabah daily reported the army is planning an intense artillery campaign targeting Daesh in al-Rai and al-Bab after pinpointing Daesh positions "with the aid of local sources."