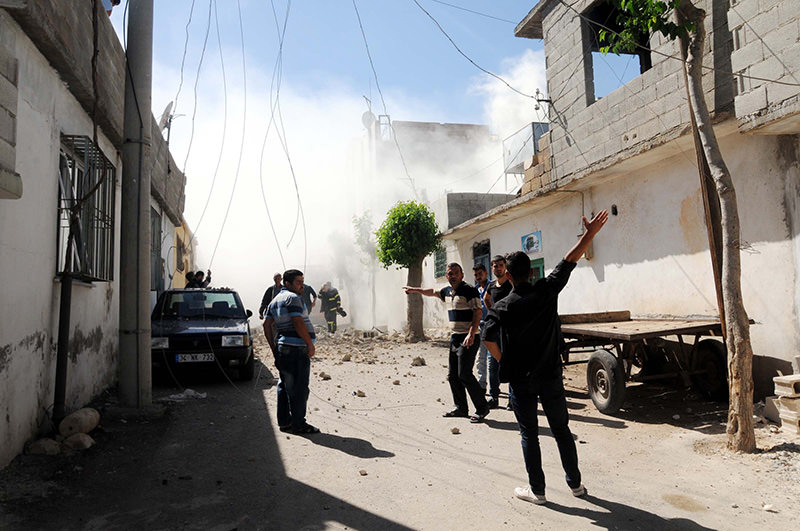 Three rockets hit the Turkish town of Kilis near the Syrian border on Tuesday and Turkey's military returned fire into a Daesh-controlled region of Syria, a day after similar rocket fire killed four people.

A house located in Bilal-i Habeşi neighborhood was hit by one of the rockets and subsequently caught on fire. while other rockets landed in a toliet in a nearby mosque and an open field.

No one was killed in the latest incident, although three people were wounded, according to Kilis Mayor Hasan Kara.

Kilis, which is just across the border from a region of Syria controlled by Daesh militants, has been hit by repeated rocket fire in recent weeks. On Monday, four people were killed when five rockets landed in the town, bringing the total death toll in the city by stray rockets to 11. All those who were killed Monday were Syrian civilians, including three children.

Last week more than 20 people were wounded in three straight days of rocket salvoes towards the town.

Kilis, which is home to an estimated 110,000 Syrian refugees exceeding its own population, has suffered repeatedly from cross-border shelling. The rockets became an almost daily occasion in the small town where locals recently rallied for more security measures.

According to the Defense Ministry, Turkey's retaliatory strikes to gunfire from Syria have killed 362 militants and wounded 123 since Jan. 1, 2016.

Prime Minister Ahmet Davutoğlu pledged last week that attacks from Syria would be retaliated against. "We will take all measures for the security of our citizens and we will leave the perpetrators of the attacks unable to further their attacks soon," he said. Media outlets reported that Davutoğlu signaled a new plan to drive Daesh from the Turkish-Syrian border. The Sabah daily reported the army is planning an intense artillery campaign targeting Daesh in al-Rai and al-Bab after pinpointing Daesh positions "with the aid of local sources."