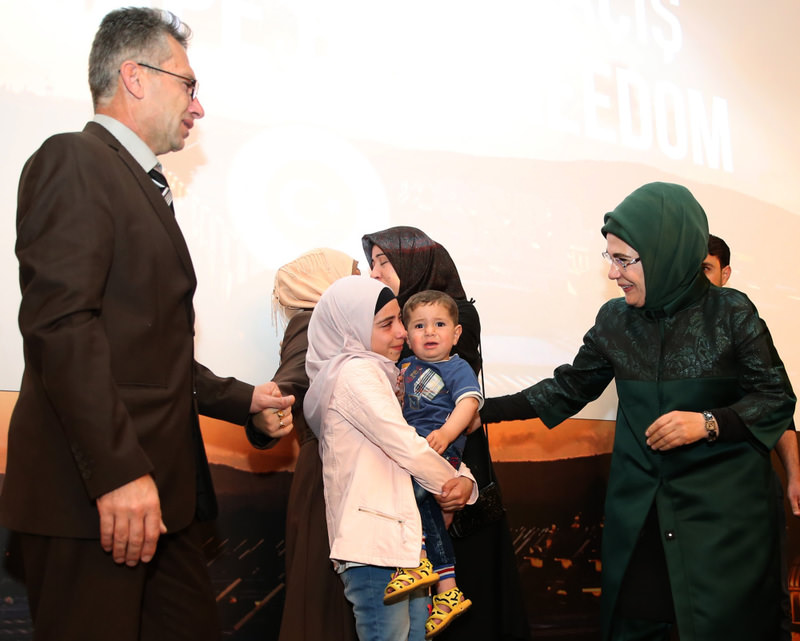 by Daily Sabah Apr 22, 2016 12:00 am
It was a night of excitement and sadness for Rua Sheikh Ali, an 11-year-old Syrian girl living in Turkey. She was interviewed and appeared in "Escape to Freedom," a documentary on Syrian refugees whose premiere was attended by First Lady Emine Erdoğan on Wednesday night. In the documentary, the young girl speaks about how she missed her elder sister and her 2-year-old nephew, whom she hadn't seen since Rua fled to Turkey with her parents two years ago. After the screening ended, Emine Erdoğan took the stage and made a speech alongside the Syrians who appeared in the documentary.

"Home is not where you were born. It is a place where people are brothers and sisters and share their love and kindness. Maybe you are not as far from people you loved and missed. You may be closer to your nephew you've never seen than you have thought," she said, turning to face Rua in the audience. Then, she invited the girl to the stage and asked her to look at the entrance of the screening hall. The excited girl then saw her sister, her husband and her young nephew Shadi. Rua and the audience burst into tears when the Syrian girl was reunited with her relatives on stage. Media outlets reported that Emine Erdoğan personally arranged the travel arrangements for Rua's sister and her family after she learned about her story, long before the screening.

The documentary, sponsored by Turkey's Red Crescent, tells the story of refugees who fled the five-year-old civil war in Syria into Turkey, and details what they went through and how they live in Turkey. Turkey hosts more than 2.7 million Syrian refugees and about 268,000 refugees stay in refugee camps near the country's border with Syria. The country pursues an open-door policy for refugees and is praised for its humanitarian assistance to displaced Syrians. "Can you imagine how difficult it is to be removed from your country, to be left homeless? I thank all refugees in Turkey for they reminded us that we should stay humane," Emine Erdoğan said in her speech.
Last Update: Apr 22, 2016 1:57 am
RELATED TOPICS