Children get on army jets 'Turkish Stars' on national holiday 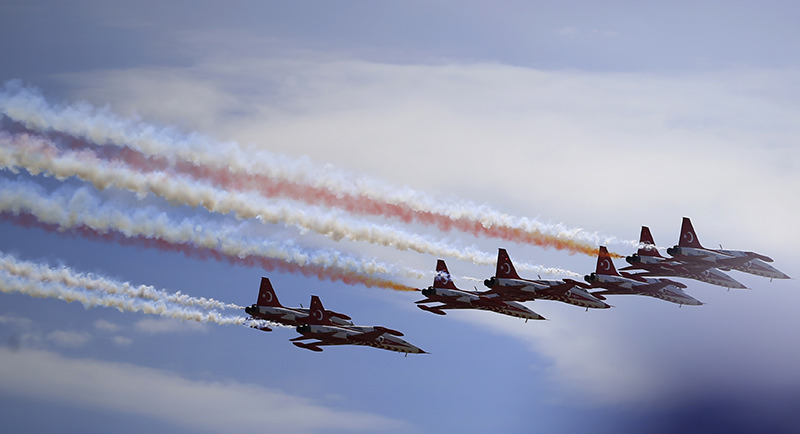 The Turkish Stars, the aerobatic demonstration team of the Turkish Air Forces, invited children inside the cockpit of one of the airplanes on the occasion of the 96th National Sovereignty and Children's Day in Antalya on Saturday.

Four boy and four girls were granted the opportunity to visit the planes.

The commander of the fleet, Staff Lieutenant Colonel Şenol Çetin said: "Today is April 23. A gift from [Mustafa Kemal] Atatürk to children. On this occasion we get in touch with our inner child thanks to this beautiful day."

Ayca Kocatürk, 11, who participated in the event said: "I will become a pilot and I will pilot these planes. I will fly Turkish Stars' planes."

Turkey marked the 96th anniversary of the first season of its Grand National Assembly on Saturday, also celebrating National Sovereignty and Children's Day.

Every year on this date, children from around the world come together in Turkey to enjoy Children's Day celebrations and festivities in a hope that these memories of friendly atmosphere will contribute to a future of enhanced brotherhood and peace among nations.

The April 23 celebrations focus on children after Atatürk, the first speaker of the parliament, dedicated the day to children as the nation's future.

The Grand National Assembly met for the first time in Ankara in 1920 during the War of Independence to lay the foundations for an independent, secular and modern republic.