Children of Anzacs at Gallipoli on 101st anniversary of battle 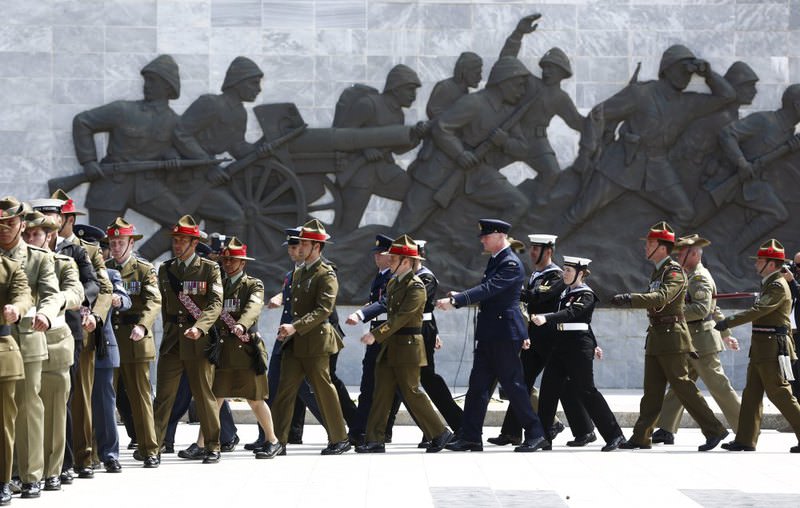 ANZAC soldiers march during an international service marking the 101st anniversary of the battle of Gallipoli at the memorial on the Gallipoli peninsula in u00c7anakkale.
by Daily Sabah with Wires Apr 25, 2016 12:00 am

The Dawn Service at Gallipoli Peninsula this morning was expected to attract thousands from Australia and New Zealand. The 101st anniversary of the start of the Battle of Gallipoli, coming after last year's centenary, is expected to be a lower key affair

Thousands of Australians and New Zealanders are once again expected to gather in Gallipoli this morning to commemorate their forefathers who lost their lives during the Battle of Gallipoli. On April 25, 1915 – 101 years ago – at dawn, the Allied fleet unloaded thousands of soldiers from Britain, France, Australia, New Zealand, Ireland, India and Newfoundland to capture the Çanakkale Straits in an effort to conquer Istanbul, the capital of the Ottoman Empire at the time. The nine-month battle in the early stages of World War I resulted in the deaths of 130,000 soldiers from both sides. Representatives of some 19 countries are expected to be present at today's opening ceremony.

The soldiers of the Australian and New Zealand Army Corps (ANZAC) accounted for around 11,000 of the dead in the campaign. Many were killed in the initial assault and the overall Allied campaign ended in failure and evacuation, but the Battle of Gallipoli has long been seen as critical in forging a national identity in New Zealand and Australia. Both commemorate April 25 as Anzac Day.

Their descendants of all ages – many wrapped in the national flags as extra protection against the early morning cold – attend the dawn service at what is now known as Anzac Cove where the first attacks were concentrated.

The Anzac dawn service as the sun rises above the Aegean is a traditional annual event but gained extra importance as the battle's centenary last year approached. As the dawn begins, a bugler plays the last post and the crowds fall silent for two minutes. In Australia and New Zealand last year, record numbers of people also turned out to mark the centenary, with dawn services and parades held across the two countries.

The Battle of Gallipoli is generally seen as a devastating military failure for the Allied powers against the Ottoman forces, who managed to resist the attempts to break through toward Istanbul. Turkish officials and soldiers also take part in the dawn remembrance, part of two days of ceremonies at the site of the battle. Gallipoli was also important in the emergence of the Republic of Turkey.

Mustafa Kemal Atatürk used his prominence as a commander at Gallipoli, known as Çanakkale to the Turks, to vault into prominence, lead Turkey's War of Independence and ultimately found the Turkish Republic. In Turkey, the victory is celebrated on March 18, on the anniversary of a navy battle when the Ottoman forces pushed back a huge Allied fleet after sinking several warships. The failure of the navy-only push through the Çanakkale Strait forced the allied side to switch to a land-based strategy, leading to the nine-month Battle of Gallipoli. March 18 is marked as the Victory at Çanakkale and Martyrs Day in Turkey.

The number of visitors from the two countries is expected to be lower than last year's because of the Australian government late last month issued a warning for its citizens due to the threat of terrorism. Australians are advised to "reconsider your need to travel" to the cities — the second-highest danger warning on a four-tier scale. Turkey overall carries Australia's second-lowest travel warning, although Australians are advised not to go within 10 kilometers of the Syrian border. However, tour operators speaking to the Australian media said the lower numbers were due to last year's centenary drawing huge crowds rather than any terror threat because many of the bookings were made before the warning.

On Thursday, several grandchildren of ANZAC soldiers laid hand-knitted poppies on the graves of soldiers. The poppies are believed to symbolize the fallen soldiers during the battle. A group of 20 students aged between 11 and 16 from the West Ryde school in Sydney visited the Arı Burnu cemetery in Anzac Cove. They also held a minute of silence.

On behalf of the group, Timothy Pinzone told Anadolu Agency "the poppy has been known as the flower of the war, so it symbolizes the blood of all those had died in a fighting for what they believed in and sacrifices they made for their countries, people and nations. It shows that it didn't matter where they would fight because they believed it was something worth fighting for."

Timothy said he thought Turkey was a lovely country and that he enjoyed his stay.

Another student, Oliva Forest, 11, said: "It is quite sad to see some of the soldiers of very young age that died and they had so much more to live for. Instead they fought for our country and helped us."
RELATED TOPICS