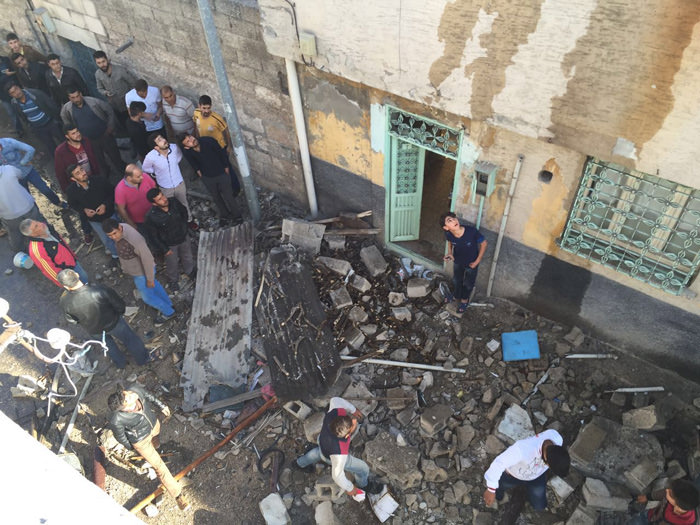 by Daily Sabah May 05, 2016 12:00 am
Four rockets from a Daesh-controlled Syrian territory have struck a residential area in Turkish border province of Kilis, killing one person while injuring seven people, including a police officer, a Turkish official said on Thursday evening.

The Turkish military returned fire into Syria, hitting Daesh targets in the subdistricts of Suran, and Kafrah, killing 20 terrorists.

Kilis, just across the border from a region of northern Syria controlled by the militant group, has been frequently hit by rocket fire in recent weeks.

The news came after three rockets fired from Daesh-controlled territory in Syria hit residential areas in Kilis on Thursday morning. Two rockets landed in the Yaşar Aktürk neighborhood, damaging a high school and offices, while a third struck the Necmettin Erbakan district 20 minutes later, a military source said on condition of anonymity, due to restrictions on speaking to the media. The attacks came between 7:45 a.m. and 8:45 a.m.

In retaliatory fire, the military killed four Daesh terrorists, according to another military source. Targets in the Syrian districts of Suran and Kafr Khan were detected by radar capable of tracing the passage of missiles to launch sites. Following the morning attacks, police cordoned off the areas hit and medical teams were dispatched.

The center of Kilis lies 6 kilometers from the Syrian border, and the town has been repeatedly struck by cross-border rocket fire since mid-January. According to official figures, 20 people have been killed and almost 70 wounded by rockets.

On Monday, Deputy Prime Minister Numan Kurtulmuş said 55 rockets were fired by Daesh into Kilis in the last three months. Retaliatory artillery fire and airstrikes have killed dozens of Daesh terrorists. According to military sources, a total of 2,144 Daesh targets have been struck in Syria since last July, with 807 Daesh militants killed. A further 365 have been killed in Iraq.

Turkish towns and provinces have been repeatedly struck by fire from across the frontier since mid-January.

In Kilis province alone, 20 people have been killed and almost 70 others wounded by rockets which have fallen inside Turkish territory since January, according to the regional governor.

Deputy Prime Minister Numan Kurtulmuş-speaking on May 2 after a Cabinet meeting chaired by President Recep Tayyip Erdoğan-said that in the last three months, 55 rockets had been fired by Daesh into Kilis. The Turkish military has shelled Daesh positions in retaliation.

On May 2, Turkish forces struck Daesh gun emplacements and ammunition dumps in the Suran, Arshak, Ikdakh and Ihtimalat regions on the Syrian side of the border, initially killing "50 terrorists". This figure later rose to 64. Most recently, on Thursday, Turkish strikes killed 13 Daesh terrorists in Syria.