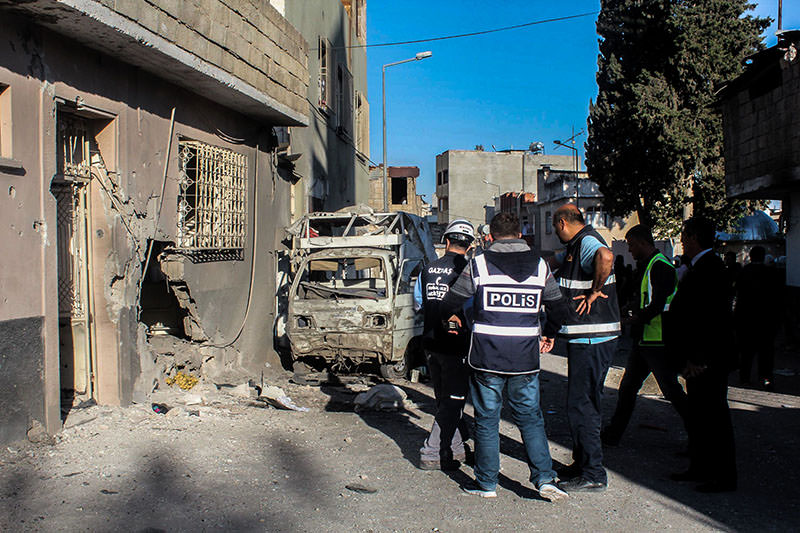 Two rockets fired from a Daesh-controlled territory in northern Syria struck the Turkish border province of Kilis on Friday at around 12:30 p.m.

One of the rockets hit the roof of a residential building in Kilis city center, whereas the other hit the garden of a workplace at the same region. Luckily, nobody was harmed in the incident.

The Kilis Governorate has already declared some of the places in the city as "temporary special security zone" for a period of 15 days, in order to ensure locals' safety.

The Governorate's statement said that some of the residential areas around two military outposts were declared as "special security zones", starting from May 6 at 8:00 a.m. and ending on May 20 at 5:00 p.m.

Turkish towns and provinces have been repeatedly struck by fire from across the frontier since mid-January. The center of Kilis lies 6 kilometers from the Syrian border, and the town has been repeatedly struck by cross-border rocket fire since mid-January. According to official figures, 21 people have been so far killed and almost 70 wounded by rockets since January 18.

Recently on Thursday evening, rockets fired from a Daesh-controlled Syrian territory have struck a residential area in Turkish border province of Kilis, killing one person while injuring seven people, including a police officer.

On Monday, Deputy Prime Minister Numan Kurtulmuş said 55 rockets were fired by Daesh into Kilis in the last three months. Retaliatory artillery fire and airstrikes have killed dozens of Daesh terrorists. According to military sources, a total of 2,144 Daesh targets have been struck in Syria since last July, with 807 Daesh militants killed. A further 365 have been killed in Iraq.

Deputy Prime Minister Numan Kurtulmuş-speaking on May 2 after a Cabinet meeting chaired by President Recep Tayyip Erdoğan-said that in the last three months, 55 rockets had been fired by Daesh into Kilis. The Turkish military has shelled Daesh positions in retaliation.

On May 2, Turkish forces struck Daesh gun emplacements and ammunition dumps in the Suran, Arshak, Ikdakh and Ihtimalat regions on the Syrian side of the border, initially killing "50 terrorists". This figure later rose to 64. Most recently, on Thursday, Turkish strikes killed 13 Daesh terrorists in Syria.