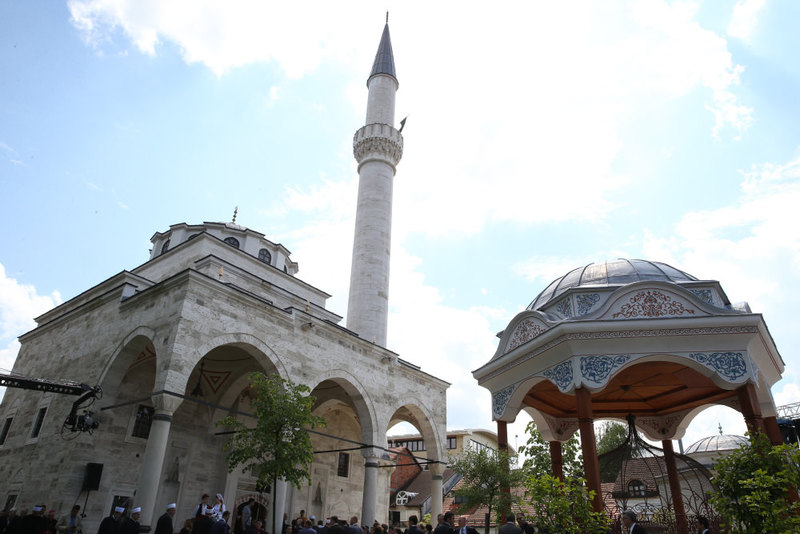 In a major attempt to heal the wounds caused by the Bosnian War, the 16th century Ferhat Pasha Mosque in Banja Luka, destroyed by Serbian forces during the war, reopenned over the weekend. PM Davutoğlu, who highlighted Turkey's efforts to complete the 15-year restoration project, attended the ceremony

Prime Minister Ahmet Davutoğlu on Saturday said that the reopened historic Ferhat Pasha Mosque sends a message of peace to all people in Bosnia-Herzegovina as well all citizens of the world. Davutoğlu made the remarks at the opening ceremony of the renovated 16th century Ferhat Pasha Mosque in the country's second-largest city, Banja Luka.

The mosque is considered a cultural symbol of the country but suffered extensive damage by dynamite in May 1993 during the Bosnian War.

In his speech, Davutoğlu highlighted three significant aspects of the mosque's reopening. 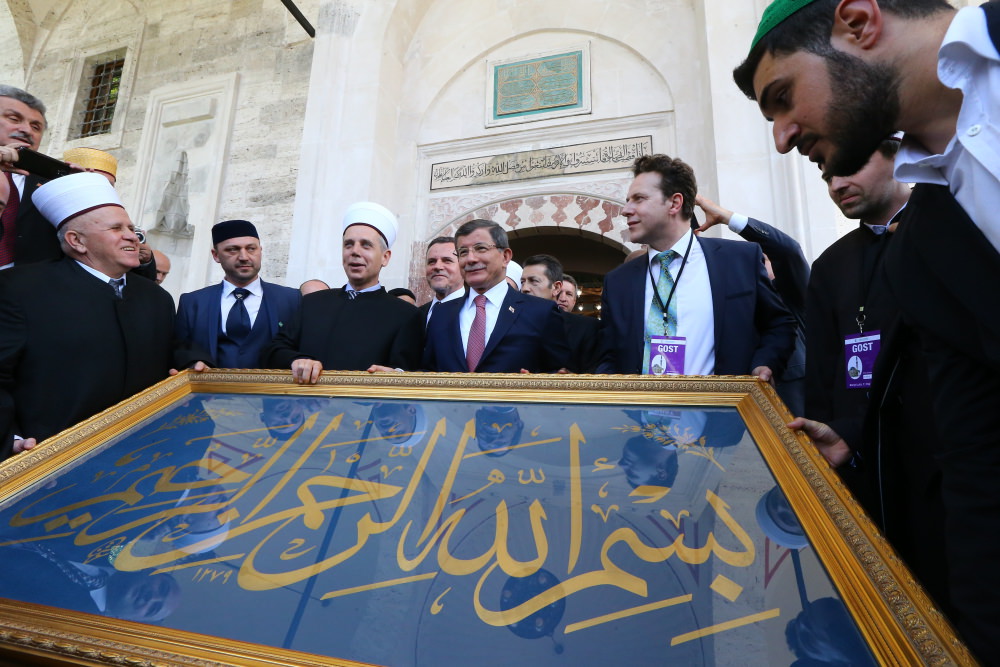 Prime Minister Ahmet Davutoğlu (C) in front of the Ferhat Pasha Mosque after its official opening ceremony in Banja Luka, Bosnia, on Saturday.

"I promise on behalf of Turkey: Every single destroyed common object of our cultural heritage will be reviewed so it can reach its historical value. We are here for fellowship, for humanity, for multicultural Bosnia-Herzegovina. We were here, we are here, we will be here for eternity," said Davutoğlu.

Davutoğlu also stressed the importance of unity between people of different faiths in Bosnia.

"The reopening of Ferhat Pasha Mosque is a message of peace to the world. It is only in a handful of cities that a mosque, synagogue, and a church stand side by side. Maybe in Istanbul and Sarajevo…If this specific character of Bosnia-Herzegovina is preserved, then humanity would be represented in Bosnia. If not, Bosnia would also lose its soul," Davutoğlu said.

He added: "You have 78 million Turks as friends to support you."

Turkey has contributed to the cost of rebuilding. After 15 years of restoration, the mosque reopened on May 7 on the anniversary of its destruction thanks to extensive restoration work by the Turkish Cooperation and Coordination Agency (TİKA).

The 16th-century mosque, under UNESCO protection as an outstanding example of Ottoman architecture, was blown up 23 years ago. A parking lot was built where it had stood. Many believe its destruction was ordered by Bosnian Serbs aiming to erase any traces of Muslim heritage in the once multi-ethnic city.

During a ceremony to lay a foundation stone for the mosque in 2001, Serb nationalists attacked visitors and dignitaries, wounding dozens and killing one Muslim.

It took 15 years for Bosnia's Muslims to obtain construction permits and funds to rebuild the mosque. Thousands of pieces of rubble from the original building were used after being recovered from the Vrbas River and a garbage site where they were dumped.

Today, only 10 percent of Banja Luka's pre-war Muslim and Croat population remains in the city following a Serb campaign to ethnically cleanse territories for their Serb statelet. "I am excited," said Ajsa Nezirovic, 64, a Muslim from Banja Luka. "I know it will never be the same again but this may allow at least some people to feel welcome back to the city."

"I only want this opening to pass peacefully and without any incident as tensions still run high," said Tatjana Kecman, a Serb, also from Banja Luka.

"The mosque is rebuilt but our children have no jobs, and pensions are poor. We were all much better off before," said Fejhila, 58, a Muslim who stayed in Banja Luka during the war.

Efendi Husein Kavazovic, head of Bosnia's Islamic community, told local daily Nezavisne Novine on Friday the reopening could be a force for good, but added:

"We are still far away from honestly looking into each other's eyes and saying: 'We are sorry. We are truly sorry.'"

War casts a long shadow here, with Bosnian Serb leader Radovan Karadzic jailed for genocide only in March. The United Nations says Bosnian Serb backing for secession from the fragile Bosnian state is a challenge to the 1995 peace settlement.