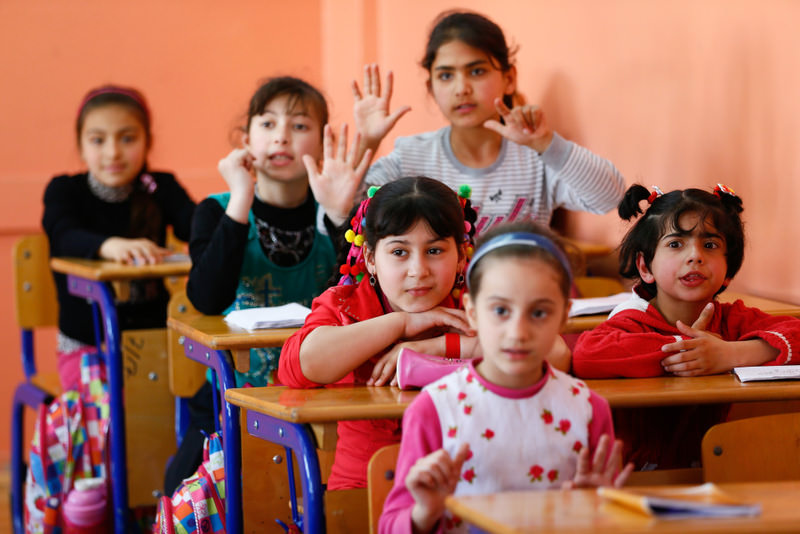 Syrian children in a classroom at an education center in Turkey. Experts say Turkey can save a ,lost generation, of Syrian children affected by war.
by Anadolu Agency May 10, 2016 12:00 am

The economic and social integration of Syrian refugees, who are designated as Turkey's ‘guests' due to their temporary status, may be beneficial for the country in the long term, a number of experts say, reminding that refugees could stay in the country longer than expected

Turkey's status as home to the world's largest refugee population, created by the millions of Syrians who fled north over the past five years to escape the ongoing civil war in that country, is a burden that Ankara has embraced for humanitarianism. Furthermore, experts told the Anadolu Agency (AA) that the 2.8 million Syrians currently residing within Turkey's borders can offer many beneficial opportunities to the country if they are integrated into society and the economy.

"With accurate, comprehensive and well-planned management of a long-term migration policy by Turkish authorities, Syrian refugees will have the potential to have a positive effect on social and economic life in Turkey," said Özlem Ekşi, an executive member of the Association for Human Rights and Solidarity for the Oppressed.

The plight of Syria's refugees in particular has gripped Europe since last year, when more than a million refugees, mostly Syrian,entered the European Union, prompting political upheaval and threatening the basic tenets of the bloc with open borders and the free movement of people. From a European standpoint, the crisis was held at bay by a deal for Turkey to accept "irregular migrants" who had crossed the Aegean Sea into Greece.

The agreement, aimed to undercut the business model of unscrupulous human smugglers, came into effect at the beginning of April and has proven successful in reducing the steady flow of refugees making the perilous sea voyage to the Greek islands off Turkey's western coast to a trickle.

As part of the agreement, the EU agreed to resettle one Syrian refugee who has not tried to enter Europe illegally for every failed asylum seeker returned to Turkey, as well as speed up Turkey's EU accession process, offer relaxed visa regulations to Turkish nationals and provide billions of euros to help refugees in Turkey.

Even though Ankara has stressed the importance of its role in caring for Syrian refugees, purely motivated by humanitarian concerns in hopes to reap the tangible benefits of the influx as well as tens of thousands of victims from other conflict zones such as Iraq and Afghanistan, has been motivated purely by humanitarian concerns, there could be tangible benefits to the influx. "Turkey has implemented an open-door policy for refugees, showing an enormous generosity and that has been appreciated by the world since the beginning of the Syrian war in 2011," Ekşi said.

In March, Deputy Prime Minister Yalçın Akdoğan said Turkey had spent more than $8 billion on refugees. This stands in contrast with the $4.5 billion the UN refugee agency, UNHCR, called for to aid Syrian refugees last year. Only $2.5 billion has been raised to date and Turkey has received a fraction of that funding.

Yusuf Ekinci, a sociologist at Yıldırım Beyazıt University in Ankara, said Syrian labor could prove to be an invaluable resource for Turkey's industrial and agricultural sectors. "The refugees took shelter in Turkey during the first phase of the conflict and are now waiting for the refuge time to exceed five years to apply for Turkish citizenship. Hence, the Labor Ministry has created several regulations regarding employing Syrian refugees with an official status so Syrians can be naturalized and illicit work can be stifled," he said.

In January, Turkey took steps to ensure that Syrians who have been in the country for six months could work legally. Syrians are now allowed to make up to 10 percent of what regular employees make in any firm and are protected by minimum wage requirements. As a result, the informal labor market could shrink more. In August,a policy document from the World Bank indicated that the market had shrunk almost 7 percent between 2011 and 2014. Ekinci warned that failing to integrate refugees into the workforce would mean they remain in unstable employment and are more likely to seek opportunities in Europe. "This presumption implies risks for working and social life in Turkey," he added. These risks include price increases due to rising demand in Turkish cities where Syrian refugees are densely located and a destabilized labor market.

Safeguarding employment is also seen as a significant way to help young Syrian refugees. According to the Directorate General of Migration Management, there are more than a million Syrian child refugees in Turkey. Müberra Emin, an education expert at the Foundation for Political, Economic and Social Research (SETA), an Ankara-based think tank, said Turkey had the opportunity to save a "lost generation" of Syrian children traumatized by war. "Turkey should not approach refugees as guests but as individuals who can be permanent citizens in the near future," Emin said. "The employment of Syrian refugees would integrate them into Turkey in peaceful and well-ordered conditions as well as prevent human trafficking to EU countries."

She called for the registration of education and work backgrounds of Syrians so they can be fully integrated into the workforce. Previously, Turkey introduced biometric identity cards for Syrians but the attached microchip does not currently include details of previous employment or training.

Across Turkey's 81 provinces, more than 300,000 Syrian children have received Turkish language courses, according to National Education Ministry, and another 150,000 are expected to receive formal education up to the end of 2016. "All of these efforts, implying a serious responsibility and burden for policy- and decision-makers, can finally bring results in the next 10 years with a strategic road map," Emin told AA.

Turkey's huge refugee population offers another advantage according to Özlem Çebi, a professor in international relations at Ankara's Hacettepe University, namely enhancing Turkey's role in the region and further afield. It is exercising this "soft power" that benefits Turkey's reputation, she said. Çebi added that Syrians currently in Turkey could cement ties between neighbors whether they remain in the country or return to Syria. "Therefore, refugees living in Turkey should be considered as potential envoys and the ambassadors of the future," she said.

Turkey's approach to the refugee crisis has also reinforced its relationship with EU states, particularly Germany, which took in the bulk of refugees in the EU last year. "The EU has agreed that Turkey is an inevitable actor for the solution of the problems in the Middle East and Europe, and the EU has taken the initiative to proceed with visa-free travel and the opening of new chapters in Turkey's EU accession bid," Çebi said. "One of the outputs of an efficient refugee policy is that Turkey's attitude toward refugees has enabled it to take firm stand against refugee hate crimes and the problems Muslims face in the EU."