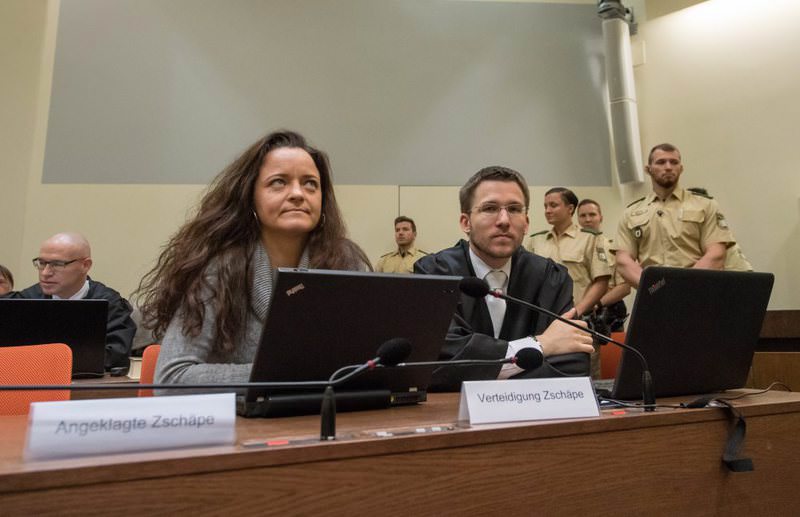 The discovery of a cellphone belonging to a key informant in the case of the NSU, a neo-Nazi gang accused of murdering Turkish-Germans and others in Germany, in a German intelligence service safe has triggered new concerns on the intelligence service's attempt to cover up its links to the gang

The National Socialist Underground (NSU) continues to be a headache for the German intelligence service years after two NSU members took their own lives before authorities discovered the gang was responsible for the killing of eight Turks, a Greek and a German policewoman as well as a bomb attack in a Turkish neighborhood and a string of bank robberies. The intelligence service has long been accused of turning a blind eye to the activities of the gang in Germany and/or covering up its tracks related to the NSU's crimes.

Another scandal broke out earlier this week when German media reported that a cellphone owned by "Corelli," a key informant for the Federal Office of the Protection of the Constitution, a domestic intelligence agency, was discovered in a safe in the headquarters of the office last summer, four years after his death. The incident came to light after authorities informed a parliamentary inquiry committee probing the NSU's crimes. The committee's head lawmaker, Clemens Binninger, quoted by German press, said the incident "deserved criticism."

Corelli's real name was Thomas Richter and he was viewed as a key figure in the investigation into the NSU's crimes. Richter reportedly served as an informant for the German intelligence services until 2012, one year before Beate Zschaepe, the sole surviving member of the NSU, went on trial after her arrest. In 2014, Richter, 39, was found dead in his home in Paderborn after he fell into a coma due to previously undiagnosed diabetes. With his death, he joined two others who died suddenly during the course of the trial. Melisa M., a woman linked to a neo-Nazi witness tied to the NSU, was found dead last year in her home, two years after her former boyfriend was found burned to death in his car before his scheduled interrogation by police about the NSU.

Irene Mihalic, a Green Party lawmaker who is part of parliamentary inquiry committee, said the intelligence service remains shrouded in secrecy on the NSU case. She told Agence France-Presse (AFP) that despite demands from parliament, the Federal Office kept material related to Corelli hidden for years. Binninger, quoted by German media outlets, said the cellphone was used by Corelli for four months before he was included in a witness protection program, and added that the cellphone might contain images and contact numbers of neo-Nazi figures and those linked to the NSU.

Barbara John, a government-appointed ombudsman for the families of NSU victims, told German media that the emergence of the previously unknown phone was the latest instance of things overlooked in the investigation into the NSU, "which frequently happens at the Federal Office for the Protection of the Constitution."

The scandal comes on the heels of the revelation that evidence related to the case was destroyed during the 2010 floods in Lower Saxony. Mihalic had earlier said she was informed of documents regarding Ralf Marschner, a neo-Nazi figure who was also hired as an informant by the Federal Office, disappeared in the floods, adding that it was "odd that the raging waters picked up these particular documents to carry away."

The NSU case is entangled in a string of incidents that has led the families of the victims to doubt that the gang's activities were properly investigated, and to suspect that German intelligence had knowledge of the NSU's crimes, thanks to its informants in Germany's neo-Nazi underground. This is not the first time that documents deemed vital to the case have allegedly disappeared. German media reported that the intelligence services destroyed documents containing information about the accomplices of the NSU, after the gang came to light during the legal process.

The NSU gang is accused of racially motivated murders between 2000 and 2006. Zschaepe is on trial while Uwe Mundlos and Uwe Böhnhardt, two other members of the gang, killed themselves when the police closed in on their hideout. German authorities revealed in 2011 that the NSU was responsible for the murders, notoriously dubbed as the "döner killings" by the German media, and which police initially linked to domestic disputes in the Turkish-German community.

Turkey closely follows the developments regarding the case as most victims were Turkish-Germans. Mustafa Yeneroğlu, head of Parliament's human rights committee, recently criticized the process regarding the NSU. Yeneroğlu expressed concerns over the deaths of several eyewitnesses during the trial process and the failure to shed light on the intelligence's role. He said Turkey expected Germany to fulfill German Chancellor Angela Merkel's pledge for a full revelation of the gang's activities and connections. "Germany can truly shed light on the case only when it investigates the role of the police and intelligence agencies in the murders, and the true structure of the NSU," he said.
RELATED TOPICS