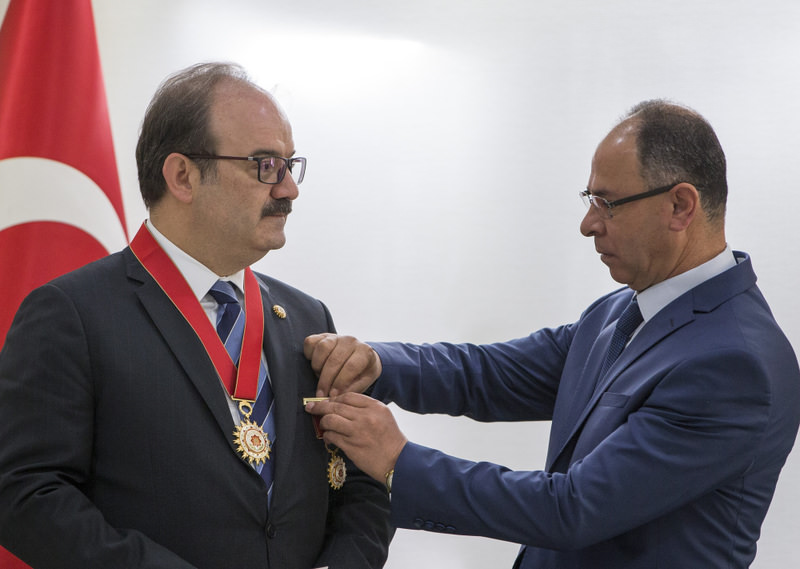 by Daily Sabah May 13, 2016 12:00 am
The Palestinian Authority yesterday bestowed the Medal of Merit and Excellence to Serdar Çam, head of the Turkish Cooperation and Coordination Agency (TİKA) for the state-run agency's projects aiding Palestinians.

TİKA, which evolved from a small institution whose work was confined to Turkic countries to a global agency running humanitarian projects in the far corners of the globe, is among the main organizations aiding Palestinians facing Israeli blockade of Gaza. The agency lately unveiled a $13 million project to build 320 housing units in the Gaza Strip for Palestinians whose houses were demolished in the 2014 Israeli military offensive. It is just one of hundreds of TİKA-funded projects, ranging from vocational training for the disabled to water wells in the Gaza Strip. In the West Bank, TİKA has built a hospital, school and offers humanitarian assistance such as supplying wheelchairs to the disabled. TİKA also is among the financiers of the restoration of Church of the Nativity in Bethlehem.

"We will not forget what TİKA and Mr. Çam did for Palestine on behalf of the Turkish people and state, what they did in terms of humanitarian needs and development. TİKA's projects have made significant steps to relieve our people from the burden of Israeli occupation," he said.

Mustafa said that TİKA has been a renowned agency in Africa, Asia and the Arab world and invested about $400 million in the last 10 years for projects in Gaza, the West Bank and Jerusalem as well as other parts of the Palestinian territories. Relaying a message by President Mahmoud Abbas, the ambassador said that the Palestinian leader appreciated TİKA's efforts to bolster Turkish-Palestinian ties and support Palestine on the path to freedom and independence.

Çam said at the ceremony that the medal he received was a sign of appreciation from the Palestinian people to the Turkish nation and a reflection of their mutual trust and admiration. Çam said TİKA's efforts were simply a part of Turkey's historic ties with Palestinians, the kinship between the two nations, and noted that his country had a culture of helping "brothers and sisters in need."
RELATED TOPICS