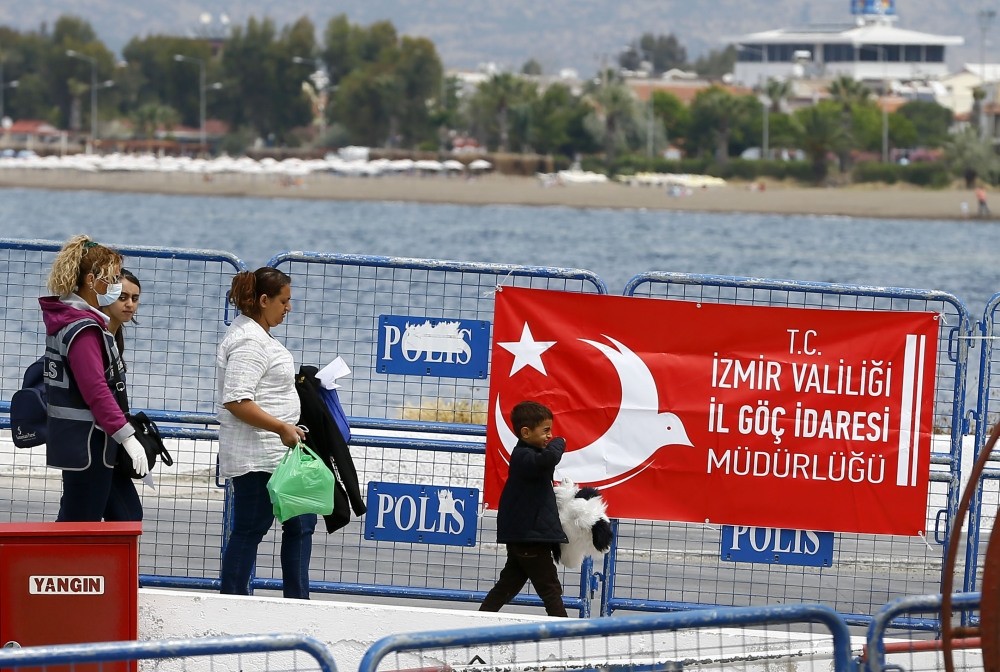 Turkish officials accompany a migrant child to a registration center after he and others disembarked from a ferry from Greece.
by Compiled from Wire Services May 21, 2016 12:00 am
Migrants continue to trickle into Turkey from Greece after the country signed a deal with the European Union to stem the illegal crossings into Greek islands.

On Friday, 23 migrants from Iran, Afghanistan, Iraq and Algeria boarded a ferry to the western city of İzmir from the Greek island of Lesbos. They were the latest batch of migrants from countries other than Syria to be resettled in Turkey. The total number of returnees has reached nearly 400 with the latest arrivals.

Migrants, including three children, were registered by Turkish authorities at İzmir's Dikili port and underwent medical check-ups. They then proceeded to travel to Kırklareli in northwestern Turkey to a center for returnees.

Facing an unprecedented flow of refugees not seen since World War II, Europe has turned to Turkey to stem the flow of migrants seeking to reach the continent through Greece, the nearest gateway. The Turkish coasts lie in close proximity to Greece's Aegean islands, which were crowded with migrants, especially Syrians who traveled before the EU-Turkey deal was signed on March 18.

Under the deal, Turkey will readmit migrants who do not apply for asylum in Greece, or whose asylum requests were turned down by Greek authorities. The agreement covers only those who traveled from Turkey to Greece illegally since March 20. In return, the EU offered to take one Syrian refugee from Turkey for each resettled migrants, funds to cover the needs of refugees in Turkey and visa-free travel for Turks, along with more concessions to the country in membership negotiations with the EU.

Turkish shores, once crowded with migrants, remain relatively empty since the deal went into effect. More importantly, no deaths were reported at sea since March. Previously, migrants were often prone to accidents in the rough waters of the Aegean Sea they tried to cross in bad weather in overcrowded, unsafe dinghies. Though the number of migrants sent from Greece neared 400, European countries took only 177 Syrians from Turkey, according to European Commission.
RELATED TOPICS