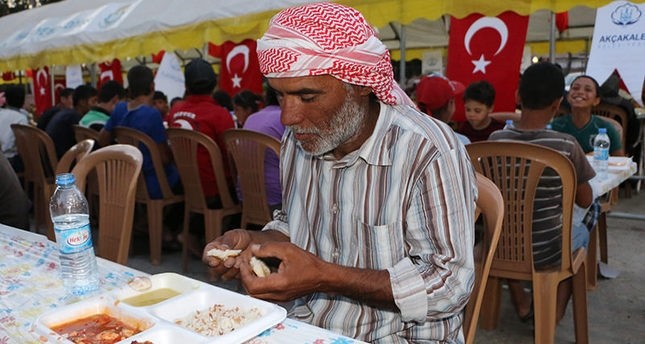 A Syrian man breaks his fast at an iftar dinner in last year's Ramadan hosted by Aku00e7akale Municipality (AA Photo)
by Daily Sabah with AA May 25, 2016 12:00 am

An NGO linked to Turkey's Religious Affairs Directorate (Diyanet) outlined its charity aid work Tuesday for the upcoming holy month of Ramadan and beyond, including iftar (fast-breaking) meals and vital supplies to people in war-torn countries.

Mustafa Tutkun, head of the Turkish Diyanet Foundation (TDV), said the group will provide refugees in Turkey with iftar meals during Ramadan -- the sunrise-to-sunset fasting holy month, falling on June 5-July 6 this year.

Turkey adopted an open-door policy towards Syrian refugees in 2011, opening its borders to people fleeing the civil war, and now hosts around 3 million refugees.

During the holy month it will also hand out food supplies to people in war-torn Syria as well as Rakhine, Myanmar in southeast Asia.

Tutkun told Anadolu Agency that the TDV has long-term aid projects in 135 countries without any discrimination on the basis of religion, language, ethnicity, or gender.

Through its "Time to Help Syria" campaign launched in late 2012, the foundation aims to ease the woes of the war-torn country, he said. "The total charitable giving in the campaign is 13,500 Turkish liras, and we are trying to find permanent solutions with sustainable projects," he added.

Telling how his group set up a refugee camp with more than 1,000 tents in Azaz in Syria's northwestern Aleppo province, Tutkun said the TDV has been supplying families with cooking supplies and beds.

"The TDV has also delivered humanitarian aid, blankets, and other materials to the area," Tutkun said, adding, "The TDV has been delivering 40,000 daily meals for 4,000 families in this camp."

Tutkun also said the TDV has been helping 33 Uyghur families living in Istanbul since November 2014.

"The TDV has been paying the rents of 33 Uyghur families, which rose to 45 last August. We are also planning to hand out iftar meals during Ramadan," he explained.

"The TDV plans to hand out 8,050 packages of humanitarian aid and to provide iftar meals to 14,500 people in Rakhine," he added.