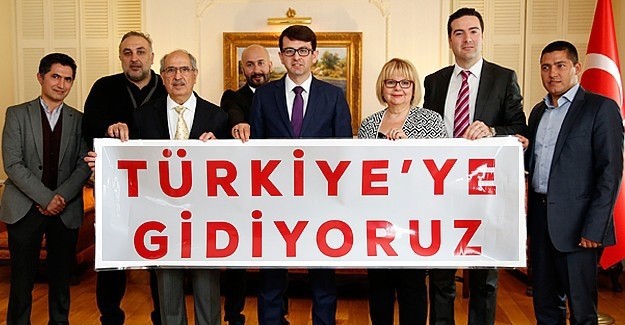 by Compiled from Wire Services Jun 04, 2016 12:00 am
Turkey's Consulate General in London has initiated a campaign, "We Are Going to Turkey," to increase the number of British tourists vacationing in Turkey. To this end, Turkish Consul General Emirhan Yorulmazlar met with representatives of Turkish tourism agencies operating in the U.K. at the Turkish Consulate General building, focusing on how to increase the number of tourists to Turkey this summer and encourage Turkish citizens to visit Turkey for a holiday and draw them to the beautiful coasts.

Sinan Aydın, the director of the U.K.-based Right Holidays Tourism Agency, said that they convened upon Yorulmazlar's invitation, as they believe the campaign might make a difference in tourism. "We talked about our concerns, thoughts and suggestions. We discussed higher flight fares during the summer and possibilities to minimize those fares, especially for families," Aydın said. "There is a big concern even among Turkish citizens living in the U.K. about going to Turkey on holiday. We have a direct flight to Gaziantep from London, but we have concerns about ongoing incidents in eastern Turkey," the director of Tulip Holidays, İtir Sökmen, said after the meeting.

Saying that everybody in the tourism sector needs to take action, Ali Keskin, the director of Eco Travel, said that they will organize a movement to encourage both British and Turkish citizens living in the U.K. to vacation this summer in Turkey. "The main concern of this campaign is to draw Turkish citizens in the U.K. to Turkey during summer. We thought that it would be better for us to launch this campaign due to negative propaganda about Turkey in the U.K. We need to encourage people to visit Turkey and ensure that it is safe for them to travel to this beautiful country," Keskin added.
Last Update: Jun 04, 2016 1:00 am
RELATED TOPICS