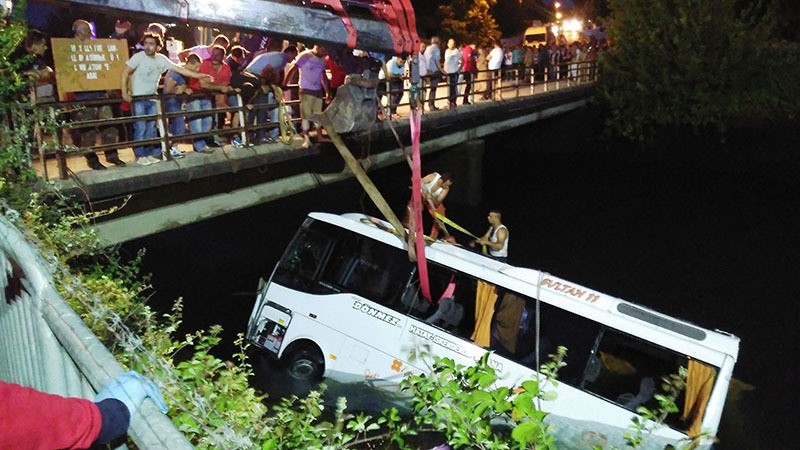 A bus carrying schoolchildren, their teachers and parents plunged into a canal in southern Turkey on Sunday, with media outlets saying it was negligence on the part of organizers of the trip that led to the deaths of 14 passengers, mostly children.

The bodies of the 14 victims were recovered from the irrigation canal on Sunday evening and funerals were held yesterday for third graders and five women, including the mothers of the children, a teacher and the bus driver. Victims were returning to their hometown İskenderun from the neighboring Osmaniye province where they had visited a national park. The bus carrying them plunged into the canal after its driver lost control of the vehicle while trying to overtake a parked truck. Passers by rushed to assist but only 24 of those on board survived.

The local governorate said the schoolchildren's trip was supposed to be "authorized" by the local administration, but parents and teachers opted to organize it themselves. An investigation is underway to determine whether the accident was the fault of the deceased driver. However, media outlets said the bus, which has a maximum capacity of 29 people, had 40 people on board at the time of the accident. Authorities said parents and teachers chose not to inform the local education directorate, which issues strict guidelines for extracurricular trips such as a lower number of passengers for vehicles used, so that more students could join the trip.

Health Minister Recep Akdağ visited İskenderun yesterday and attended the funerals after visiting the injured at hospital and the homes of three victims. The children's school, 5 Temmuz Primary School, was closed yesterday as the town mourned the victims.

Reckless driving and drunk driving are among the main causes of traffic accidents in the country, and they claim the lives of more than 3,000 people almost every year. Sunday's accident was the deadliest of the day, on which a family of six were killed on a road connecting the southeastern provinces of Diyarbakır and Şanlıurfa when their car overturned.