10 killed, 4 others injured after truck slammed into van in central Turkey 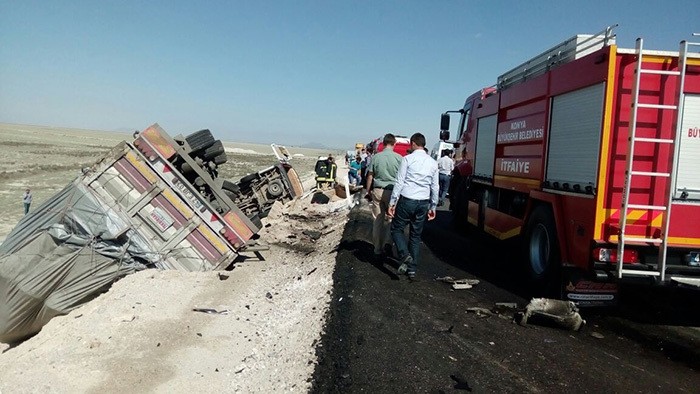 At least 10 killed and four others injured after a truck slammed into a van on Friday in Ereğli district of central Konya province.

The van's driver Faruk Peltek and nine others were killed in the accidents, while the truck's driver Eser Gürsoy and three others were injured.

The victims, 10 men from three families, were returning to their hometown in the southeastern province of Şanlıurfa after attending a funeral in the western city of İzmir. A truck on the incoming lane crashed into the minibus, whose driver was allegedly trying to overtake another vehicle.

On June 5, a bus carrying children, teachers and parents back from a school trip plunged into an irrigation canal in the southern province of Osmaniye, killing 14 people — six of them children.

Reckless driving and drunk driving are among the main causes of traffic accidents in the country, and they claim the lives of more than 3,000 people almost every year. June 5th accident was the deadliest of the day, on which a family of six were killed on a road connecting the southeastern provinces of Diyarbakır and Şanlıurfa when their car overturned.