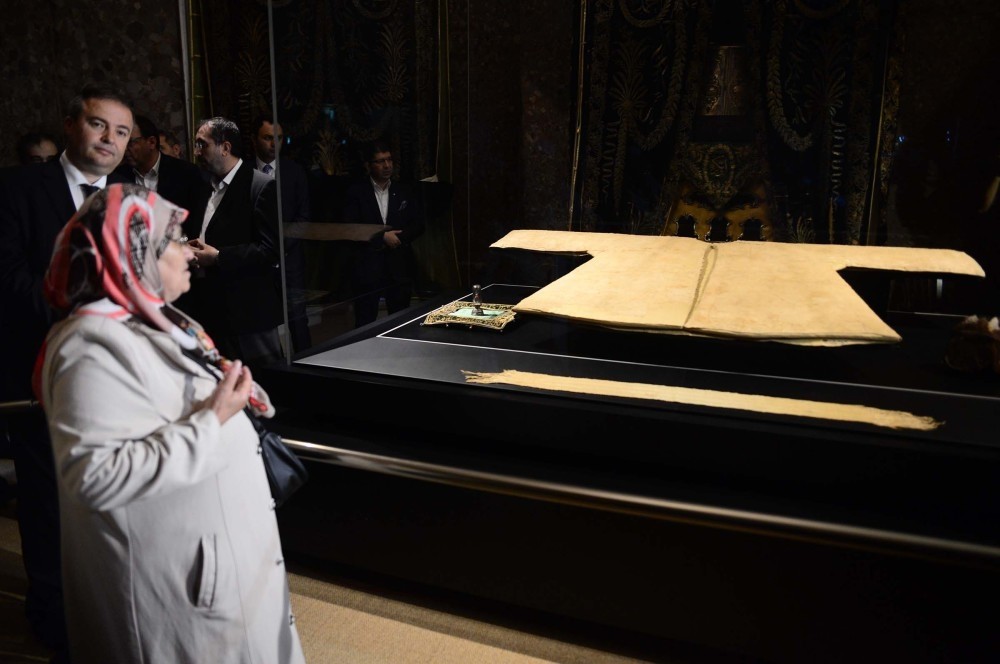 Muslims flocked to see Prophetu2019s cloak on display after the exhibition opened on Friday. (DHA Photo)
by Daily Sabah Jun 11, 2016 12:00 am
The Hırka-i Şerif or Holy Cloak, so named since it was worn by Prophet Muhammad, was opened to visitors on Friday in Istanbul with Muslims hailing from around Turkey who came to see one of the few relics from the era of Islam's prophet.

The Hırka-i Şerif Mosque in Istanbul's Fatih district, where the cloak will be on display throughout the Muslim holy month of Ramadan, hosted an event attended by the city's administrators and a large congregation for the launch of the exhibition.

Clerics recited prayers at the ceremony, which was held on the first Friday of Ramadan, a sacred day for Muslims. Rahmi Yaran, mufti of Istanbul, said they were pleased and honored to see the holy relic on display again and that the faithful had convened to "receive [the Prophet's] blessing."

Gülay Köprülü, a descendant of Owais al-Qarani was among those attending the ceremony. Al-Qarani of Yemen was a soldier who lived during the lifetime of Prophet Muhammad. But to millions of Muslims, he is better known as a devout man who set out on a journey from Yemen to Saudi Arabia to meet the prophet. Though he could not meet the prophet and returned to Yemen because of his duties on a military expedition, al-Qarani received the cloak of the prophet after Muhammad's death from the prophet's companions, who gave it to him at the prophet's will. Köprülü's family is custodian of the cloak and she said that she was happy to fulfill her duty to protect "an important relic" and find more people interested in seeing it.

The mosque, which is closed for restoration, will have a section open exclusively for visitation of the Hırka- i Şerif. A new elevator will allow the sick, disabled, elderly and pregnant to see the cloak without having to wait in line.

Istanbul has hosted most of its holy relics in Topkapı Palace since Sultan Selim's conquest of Egypt in the 16th century where he seized items of the prophet in the custody of the Mamluk caliphate, along with the control of the global caliphate of the Muslims. Among them is a battle standard from the prophetic era, a tooth of the prophet and hair from the prophet's beard, as well as his sandals and a bowl he used to use.
Last Update: Jun 11, 2016 1:12 pm
RELATED TOPICS