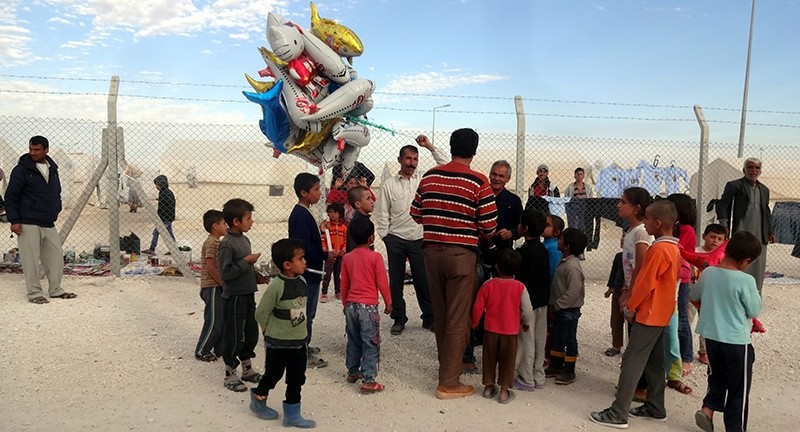 A Turkish classical-music singer recalls the day in 1998 when she saw a two-year-old, blue-eyed blonde girl standing on the steps of an orphanage in Bosnia, shortly after the end of the country's brutal three-year war.

"She could have been my daughter," says Muazzez Ersoy years later in an exclusive interview with Anadolu Agency.

"She was barefoot, standing on the steps where I was surrounded by a number of other children," Ersoy recalls: "Lily-white skin, how beautiful she was."

During a visit to the devastated country, Ersoy donated some toys to the children staying at the orphanage, long before she became Turkey's 'goodwill ambassador' to the UN's refugee agency, the UNHCR, in 2006.

"If I was already appointed as a goodwill ambassador, perhaps that girl would be given to me [for adoption]," Ersoy says, sitting in a garden chair on her office's patio in Istanbul's upscale Etiler district.

Her remarks bring to mind Angelina Jolie who served as a UNHCR goodwill ambassador for many years and was later appointed as the body's special envoy in 2012. Jolie has six children, three of them adopted from Cambodia, Vietnam and Ethiopia.

Ersoy is accompanied by 13 other 'goodwill' celebrities from different countries such as Greece, France, China and South Sudan.

The 58-year-old singer has a refugee background herself; her mother's people came from the northern Greek city of Thessaloniki during a population exchange between Turkey and Greece after the First World War.

Having had a career spanning more than 25 years, Ersoy is best-known at home for her album series Nostalji [Nostalgia]. She became a UN goodwill ambassador 10 years ago on June 20, which marks World Refugee Day.

According to the UN, a basic requirement for being a goodwill ambassador is a "real desire to help people in need".

Ersoy has long been interested in humanitarian issues, giving benefit concerts to ease the plight of children and women.

Ersoy told Anadolu Agency that she is currently working on a number of projects to break prejudice against refugees.

She and an associate, Ali Güçlü are planning to produce a number of TV dramas which will feature refugees articulating their struggle to adapt in a new country.

Her advisor on UN issues, Güçlü says he worked as a project consultant between 2003 and 2007 for the humanitarian body.

"We want to explain things to people, [sometimes] we cannot break their prejudice with words alone," Ersoy says.

The television project envisages refugees playing out their own life stories, she explains. Güçlü says that they are already in contact with senior officials in Turkey as well as academics and NGO representatives.

"I will be in the show with my UN goodwill ambassador identity," Ersoy says.

Their plan is to make the Turkish public ask 'Why did those people become refugees?'.

When asked if she thinks those people are marginalized, Ersoy says: "I think so. Perhaps, in general, it is not true but some [Turkish] people look at them differently. A prejudice occurs."

"I was in Bodrum last summer," Ersoy adds, referring to a popular Aegean getaway resort now turned into a deadly but easy route for refugees to try and cross from Turkey to Greece:

"There were refugees in every park in central Bodrum. My heart sunk. Toddler Aylan's picture [Aylan Kurdi, a Syrian child who drowned in the Aegean Sea in 2015] still haunts me. So many babies just like Aylan lost their lives in the sea by drowning. This really hurts me."

The International Organization for Migration (IOM) said earlier this month that 376 refugees have died in the Aegean Sea between Turkey and Greece this year alone.

According to Ersoy, everyone should take some responsibility to prevent these tragedies:

"These people did not leave their country happily. They had to leave their homes amid the pain that they had gone through.

"We should all take responsibility for these children's education, health needs or any necessity that any person would need," she adds.

Turkey is sheltering the largest number of Syrian refugees in the world, with nearly three million currently inside the country.

Almost 260,000 Syrian refugees are hosted in 26 container or tent cities in ten provinces across Turkey, according to the country's Disaster and Emergency Management Authority, AFAD.

"I am relieved after seeing what our government has done," Ersoy says.

Ersoy spent a full day at a camp in Turkey's southeastern province of Gaziantep in 2014 with representatives from AFAD.

"We visited the camp together and inspected it. It is magnificent; you would not call it a camp. A modern incredible city has been built by our government," she says.

When asked what she felt during her visit to the camp Ersoy says: "On one hand I felt sadness because these people had to leave their country with great pain.

"Some lost their mothers, some family members or relatives. (…) On the other hand, I was happy. Why? [Because] they have an environment which is free of war or pain."

Ersoy says that after her next album hits the shelves in August or September this year, she is planning to release a single, collaborating with refugee musicians or singers living in Turkey.