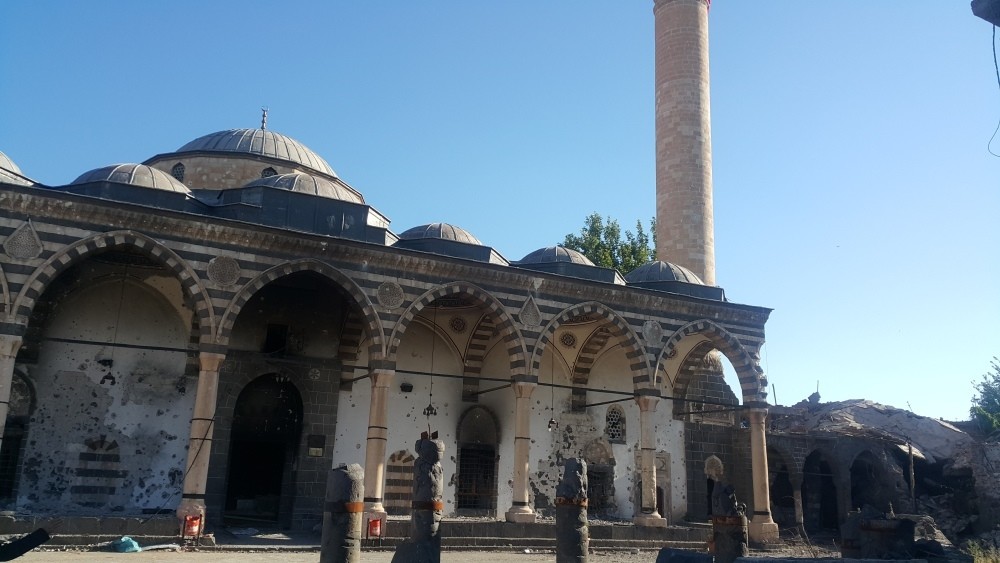 A mosque in the Sur district heavily damaged in terror attacks. Bullet holes on its walls are a dire reminder of the months-long terror campaign by the PKK that has left much of the district in ruins.
by Ali Ünal Jun 13, 2016 12:00 am

As counter-terrorism operations wrap up in the southeast, Environment and Urban Planning Minister Mehmet Özhaseki explained to Daily Sabah the details of the plan to rebuild the historic Sur district, which will cost about TL 7 billion

After completing counter-terrorism operations, the government has intensified its efforts to recover areas hit by the clashes with the outlawed PKK.

Reconstruction of Sur, a historic district of Diyarbakır that is included in UNESCO's World Heritage List last year is among Environment and Urban Planning Minister Mehmet Özhaseki's top priorities. Speaking to Daily Sabah, Özhaseki explained the details of the three-stage action plan for Sur, asserting that Sur will become a center for tourism when it is restored to its original state. He stressed that the reconstruction of the historical district will be realized without causing any indignation to the citizens whose houses were damaged.

"We can summarize our action plan under three stages. First, we will compensate people whose homes were damaged. The state will cover the expense of damaged buildings. Now it is time for the state to heal the wounds. The second is to restore every historical building and object in the district. There are many beautiful historical structures in Sur, ranging from mosques to churches and inns to fountains. It is almost like an open-air museum. The third stage is street improvement, which will benefit local shopkeepers. We will renovate all of the stores on Gazi Street and Melik Ahmet Street with basalt and wood, providing an authentic appearance to them. We are also trying to rebuild the traditional Diyarbakır houses in accordance with their original state," he said.

The PKK has engaged in an all-out offensive, targeting security forces and civilians, since last year in Diyarbakır and other provinces in the predominantly Kurdish southeast. Apart from residences, a large number of public buildings, schools and mosques were either destroyed or partially damaged in the clashes between security forces and the PKK as well as in direct PKK attacks.

PKK clashes with security forces forced locals in Sur, a district of about 117,000 people, to leave their homes, only to see them in ruins when they returned. Özhaseki said they had obtained the proper data for the shareholders of all damaged buildings and they will compensate them in cash for their damaged property or offer them residence at one of the 3,000 apartments the government is currently building in the area.

"We will reconstruct a neighborhood consisting of only traditional Diyarbakır houses. We will not build three- or four-story buildings as alleged. This is completely untrue. There is an existing zoning plan that we will abide by," he said, countering allegations that the district's historical texture would be spoiled by the rebuilding plans.

Sur, which literally means "fortress wall," is located at the heart of Diyarbakır and is one of the oldest settlements in the area, home to traces of ancient civilizations after centuries of Hittite, Persian, Roman, Arab, Seljuk and Ottoman rule.

"There is ongoing infrastructural work and we are also working on the roads. Roads and other infrastructure will be completed within five months. We are also working on street improvement on a stage-by-stage basis. The first stage will be completed within three months and the second stage will be completed within six months. Within a few years, we will have a perfect location for tourism. This will cost about TL 7 billion 7.5 billion ($2.39 billion to $2.56 billion). This is a serious cost. This cost includes rebuilding infrastructure as well as the restoration of approximately 600 historical structures. We are not only building houses, but rebuilding the whole district," Özhaseki said.Diyarbakır is currently governed by the Peoples' Democratic Party (HDP) local affiliate Democratic Regions Party (DBP). The opposition HDP is closely linked to the PKK and draws support from a majority of cities and towns in the southeast. Özhaseki said they may hold a meeting with Diyarbakır municipality officials on the issue and might cooperate with them. "If they want to help and their aim is to improve the conditions for locals, we won't refuse their help. However, I have observed that some municipalities replaced the PKK in fighting against the state - this is especially true for Şırnak and its districts. They are trying to prevent whatever the state wants to achieve. If they were really concerned about the well-being of their residents, they would offer to help," Özhaseki said.

DBP municipalities' support for the PKK, either by supplying equipment such as trucks, bulldozers to help militants block streets for attacks or funding have long been rumored. Former Prime Minister Ahmet Davutoğlu said in January that "municipalities working as logistics center for the [PKK] terrorist organization will pay the price," and implied that municipalities diverted taxpayer money used to fund municipalities in the country to the PKK.

Özhaseki said the government is planning two reforms to municipal law to curb support for terrorism. "The first concerns municipalities that neglect their duties. A municipality's duties include, but are not limited to, providing water to a district and garbage collection. If they deliberately neglect these duties, governors will warn while providing them a reasonable deadline to complete the task. If the municipality does not fulfill its duty, the governor will overtake this duty. This will be done without consulting the procurement law. İlbank will cover the cost. The second concerns municipalities that support terrorism. Terrorism is a crime against humanity. The only thing to be done is to remove those in power from duty. It is irrelevant if they are elected or not. They will then be replaced with an eligible candidate. The legal reforms are ready and will be discussed at the general assembly in the following days," he said.
RELATED TOPICS