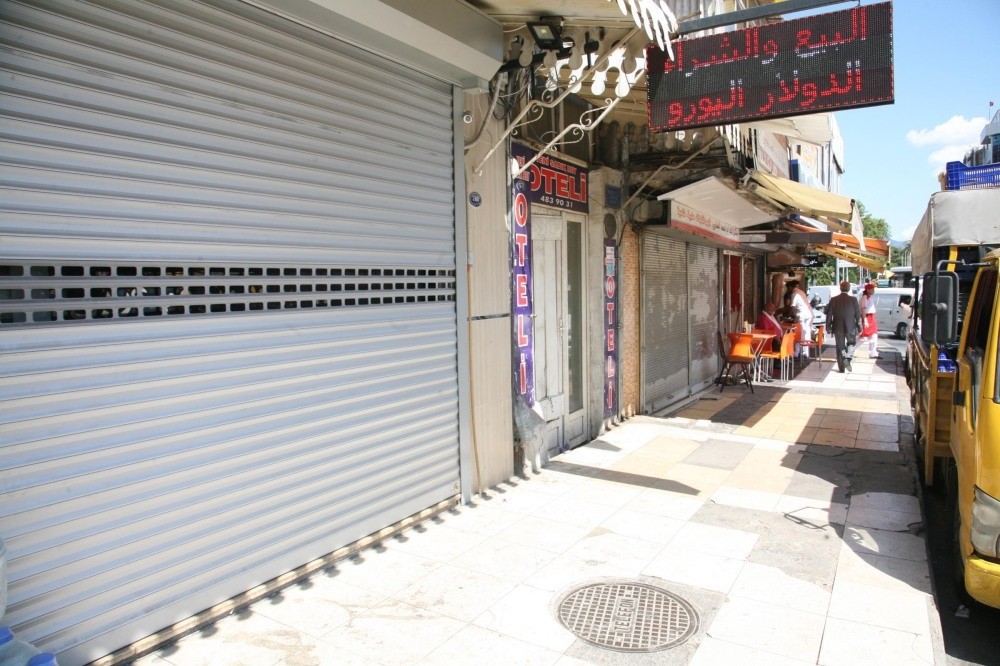 Basmane's migrant quarters is largely deserted now, forcing shops with Arabic signs to close down in the absence of clientele.
by Daily Sabah with DHA Jun 14, 2016 12:00 am

A deal between Turkey and the EU to decrease illegal refugee crossings to Europe has claimed an unlikely victim in Syrian businesses along the Aegean coast. Stores run by Syrians have closed down as patrons leave the shores from which they once tried to board boats to Greece

In efforts to save the lives of migrants who risk certain death in hopes of reaching Europe, the Readmission Agreement between Turkey and the EU was hailed as a success, curbing the influx of refugees trying to reach Europe illegally by traveling to Greece from Turkey. The agreement, which was supposed to allow EU countries to take refugees from camps across southeastern Turkey in return for sending illegal migrants who had not sought asylum back to Turkey, has inflicted collateral damage on local businesses and shops that cater to migrants along the Aegean Coast.

Primarily owned by Syrians or joint enterprises of Turkish and Syrian businesspeople, the systematic shutdown of these shops brings with it a dwindling customer base which had been made up of Syrian refugees.

The commercial district of Basmane in the western city of İzmir has long been associated with migrants, who are often seen on the streets waiting for boats to take them to the Greek islands. This unofficial crossing point for migrants now rarely sees them, and the Turkey-EU deal could be credited with the disappearance of hundreds of Syrians overnight. The district is home to dozens of shops, including restaurants, cafes, cellphone merchants and grocery stories, has catered to Syrian refugees since the war broke out in that country forcing hundreds of thousands to flee Syria since 2011. Only a few of these businesses are still operating while others put up signs of "for sale."

Migrants have begun to return to Turkey on comfortable ferries in place of the overcrowded and dangerous boats which were primarily used by refugees to get to Greece prior to March, when a deal between Turkey and the EU went into effect earlier in April. Dozens of migrants, mostly Asian, have returned from travels to Greece as a result of the Turkey-EU deal which was implemented earlier in April. The agreement remains precarious, as Turkey accuses the EU of drawing out the acceptance of conditions for a visa-free travel for Turkish citizens, and a relaxation of strict criteria on membership. Turkey has delayed final approval of the deal over a series of disagreements with EU, Turkish media outlets reported earlier this month. President Recep Tayyip Erdoğan warned the 28-nation bloc that the readmission agreement would not be ratified in Parliament, should visa liberalization fail to be realized by June 30. In February, the president warned Europe of a possible end to the agreement, saying that Turkey could let refugees through its borders to Europe, warning that "buses and planes are not there for nothing."

The Turkish Coast Guard has reported a considerable drop in the number of migrants boarding dinghies to cross into Greece since the readmission plan began. Only 43 people tried to illegally cross to the Greek islands on June 12, a significant decline from the 5,237 people who risked their lives to reach the islands in January, despite bad weather. No casualties from migrant crossings have been reported since April, when 32 people drowned when their unsafe boats overturned or sank off the Aegean shores.

Facing an unprecedented flow of refugees and migrants from around the world fleeing conflicts and poverty, unprecedented since World War II, the EU has turned to Turkey to help. Ankara responded by approving a deal for the resettlement of migrants and a heightened clampdown on migrant smugglers, further relieving Europe of the burden of illegal migrants.

Turkey hosts more than 2.7 million refugees, and only a tiny fraction stay in refugee camps near the border with Syria. The rest are dependent on aid and the little income which they earn through work permits which Turkey introduced earlier this year. The country of 78 million is praised for its hospitality for refugees despite its limited means, while Ankara criticizes international community for taking in only a few refugees. Turkey was one of the first countries to open its doors to Syrians displaced by war and sever ties with the brutal Assad regime, which has violently suppressed opposition. Five years later, Turkey remains a safe haven for refugees, who have streamed into the country with few possessions, little to no money and no place to call home.
RELATED TOPICS